The 10 Best Dinosaur Parks in the UK

Ask our children about their favourite day out and it would most likely involve dinosaur parks. Any kind of dinosaur seems to have them transfixed and although they might struggle with some seemingly basic words, they can read just about any dinosaur names!

There’s an old saying that the times of your life when you know the most about dinosaurs is:

This is partly true. Our boys loved dinosaurs at 4 but they still love them. If you’re in the same boat, then you probably need to think about visiting one of the best dinosaur parks in the UK (or a dinosaur museum or just dinosaur places in general)!

We have visited a fair few ourselves over the years, but UK dinosaur attractions have become so popular and sprung up all over the country that there are still lots of dinosaur days out to be had! They’re perfect for family days out whether you are looking for something local to do or you are on a UK staycation.

Here’s a quick rundown of the 10 best dinosaur parks in the UK. We’ve also included links to the best dinosaur museums in the UK at the end of the post and added a few more new openings in 2022.

This post contains affiliate links. If you click on one and book something, we may earn a small commission but this is at no extra cost to you.

So – where can you see dinosaurs in the UK?

**NOTE: Most, if not all of the parks require you to book tickets online in advance and may have additional safety measures in place** 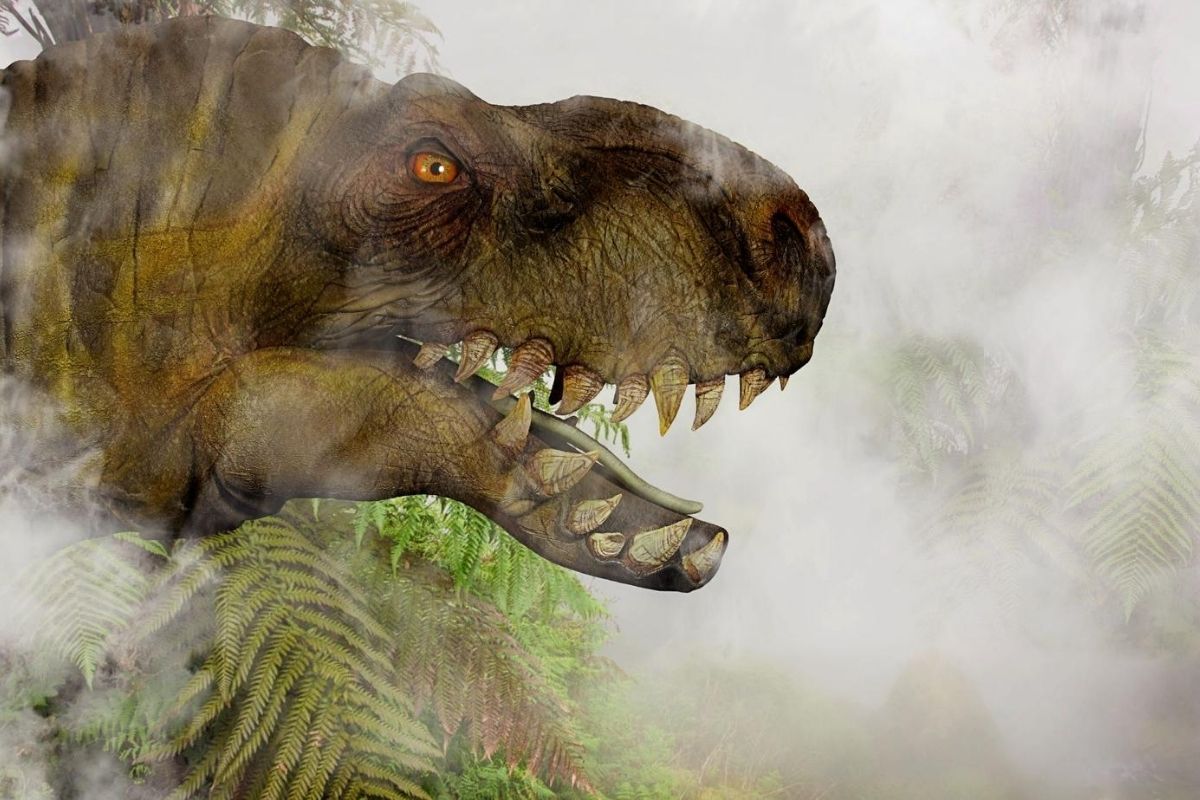 Spotting T Rex at dinosaur parks in the UK

Roarr! Dinosaur Adventure! in Norfolk is the UK’s largest Dinosaur adventure park. It happens to be the first UK dinosaur park we ever visited and it’s somewhere we go back to because it is so good.

It is arguably one of the best dinosaur attractions in the UK with a dinosaur trail (of course), a maze, high ropes, dinosaur dig, indoor soft play and much more. In the summer months, there’s a fantastic splash zone.

The dinosaur trail winds through a wooded area where you’ll find life-sized dinosaurs including an ENORMOUS Brachiosaurus! It’s hard not to be wowed by this. Read Our Bucketlist Lives’ review of Roarr Dinosaur Adventure.

Central trendy art house with free parking. About this rental: A house with 2 bedrooms, 2 bathrooms and spaces like kitchen and garden. Read more about it here!

Another great variant is ​​Cottage In Brampton (Near Aylsham), Norfolk. Dove Cot is a lovely 200 year old brick and flint cottage situated in the delightful village of Brampton on the River Bure. It is located 13 km to Dinosaur Adventure. Book here!

Things to do in Norfolk with kids

Looking for a few more ideas of where to take the kids in Norfolk? Why not try…

– The beaches on the north Norfolk coast

Paradise Wildlife Park in Hertfordshire is home to the amazing World of Dinosaurs which is one of the best animatronic dinosaur parks in the UK. There’s a very impressive Jurassic Park style entrance.

The walk takes you past moving and roaring dinosaurs and you’ll be able to hop in a jeep for a great photo opportunity recreating the scene in Jurassic Park with the T-Rex chasing you.

The Rex Express is a dinosaur-themed narrow-gauge train for which there is an additional cost of £2 and a dinosaur dig in a huge sandpit where you can dig up dinosaur bones.

This park is not just a dinosaur attraction though. It is predominantly a zoo with a huge number of animals like white lions and tigers and the UK’s biggest anaconda. There’s also an excellent playground.

Look out for their special Halloween event – Dinos After Dark.

If you can’t get there in person, we love how they have an introduction to their dinosaurs on their website as well as several YouTube and Facebook videos taking you on walks around the park.

They kept a lot of families (including us) entertained during lockdown with their live Facebook sessions. 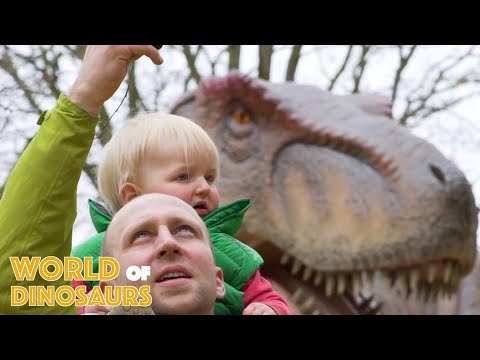 Rural retreat in Hertfordshire near the idyllic medieval village of Ashwell. The Domek is set within an idyllic courtyard of the Gotha Gardens at Pembroke Farm. 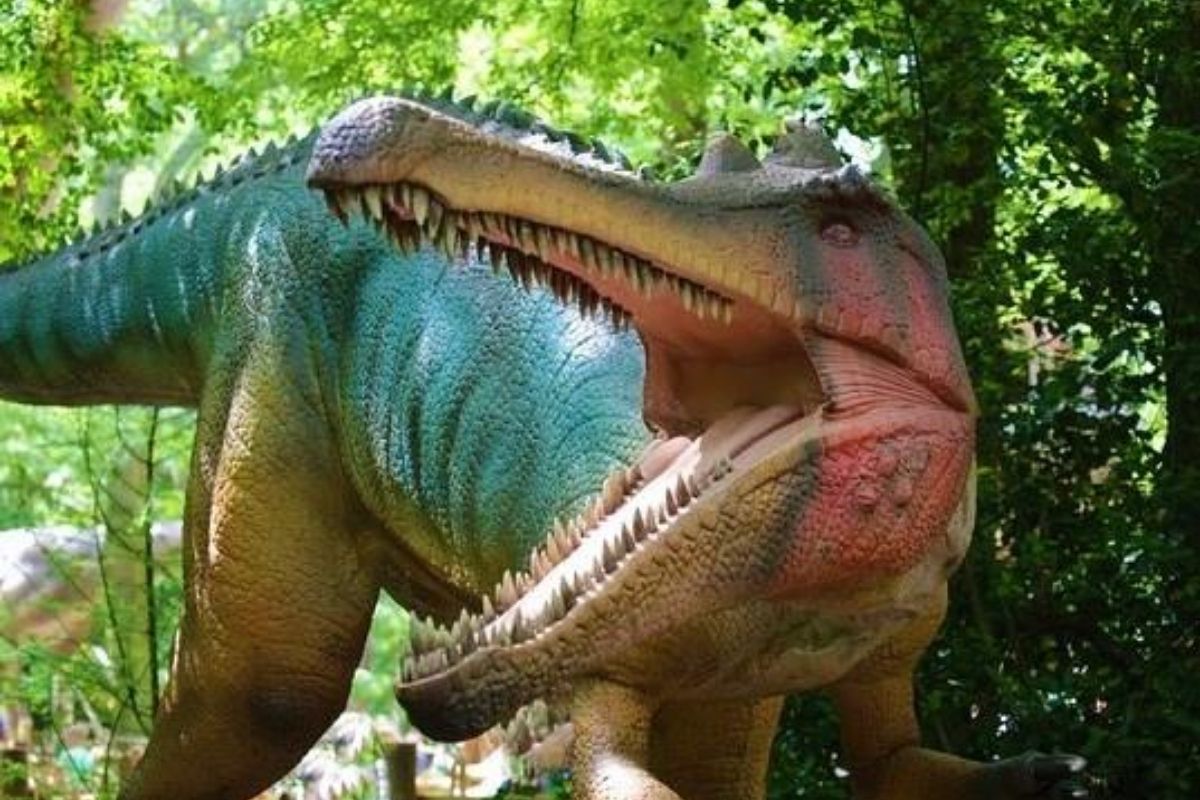 Things to do in Hertfordshire with kids

For Harry Potter fans there is a fantastic tour – Warner Bros. Studio: The Making of Harry Potter with Luxury Round-Trip Transport from London. Don’t miss it!

Knebworth House is a beautiful country estate in Hertfordshire with lots to see and do including a fabulous play area (Knebworth Fort), giant slides and a maze as well as the house itself. But it is the dinosaur adventure park that our kids love.

The dinosaur trail takes you past 72 life-sized dinosaurs with information boards, wind-up sound boxes to make the dinosaurs roar and a huge chalkboard at the end to draw your own caveman drawings.

Knebworth is also home to lots of amazing events throughout the year such as How to Train Your Dinosaur, Classic car show, Horrible Histories and the Great British Food Festival. 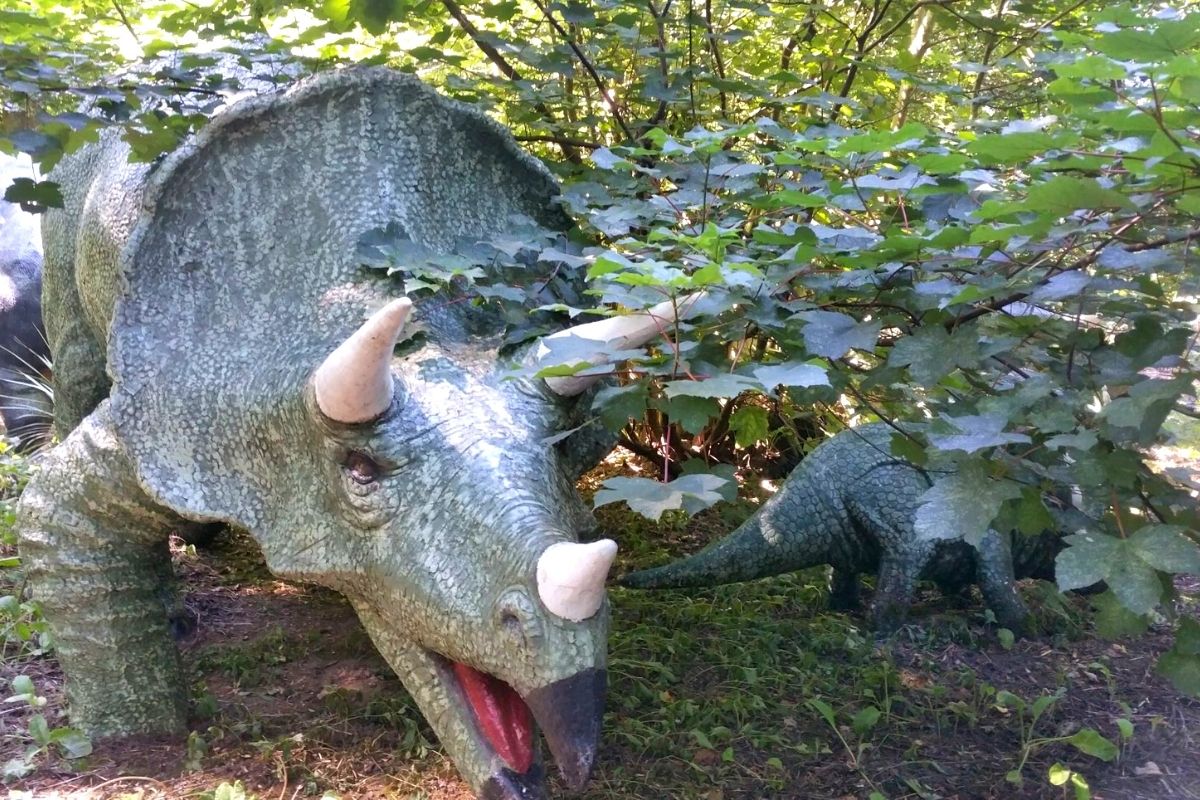 Things to do in Hertfordshire with kids

Combe Martin Wildlife and Dinosaur Park is home to over 19 animatronic and static dinosaurs with a life-sized T-Rex. The Dino Express train takes you on a short ride through a dark tunnel to the caveman village where you’ll be in for a surprise when Dave the dinosaur sneezes!

There’s also a small dinosaur museum with real and replica fossils and the indoor dinosaurus playzone. On the non-dinosaur side, the have a Tomb of the Pharaohs and botanical gardens. 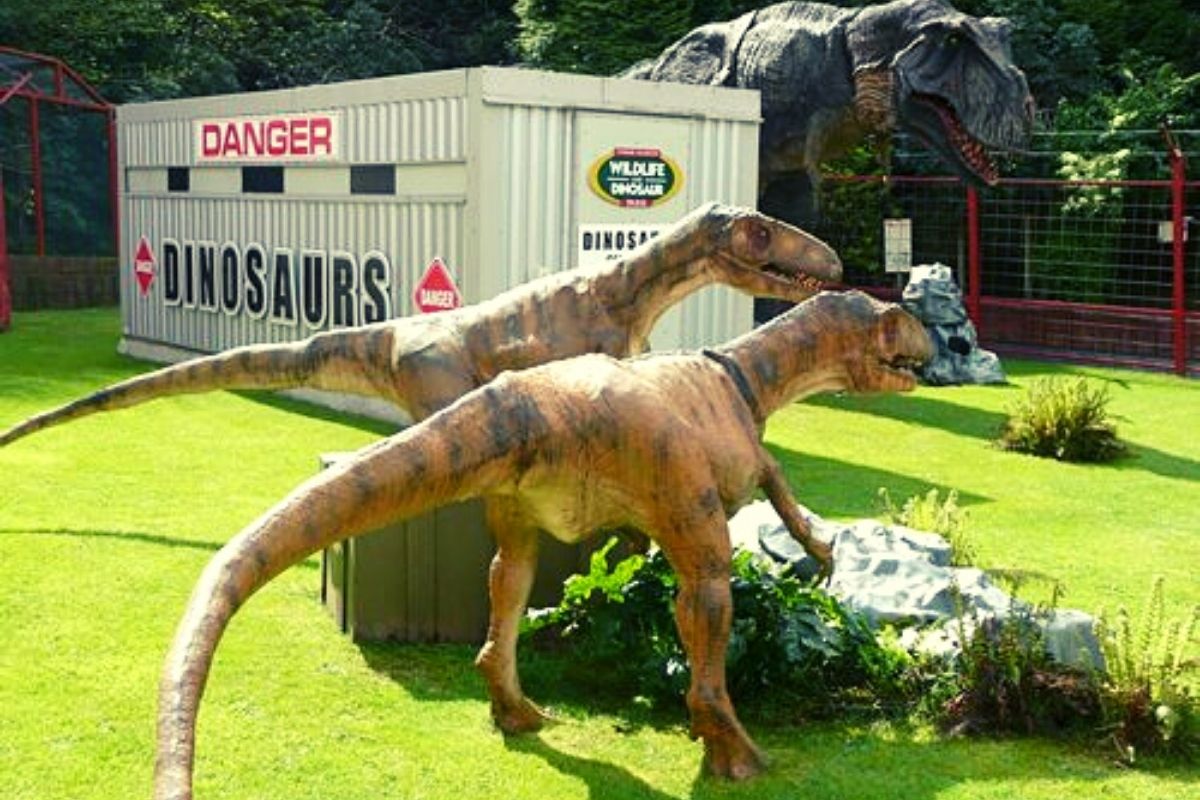 Things to do in North Devon with kids

Blackgang Chine is the oldest theme park in the UK and home to Restricted Area 5 where you will get up close and personal with life-sized moving dinosaurs. There are 5 other lands of imagination at the park – Underwater Kingdom, Fairyland, Nurseryland, Pirate Cove and Cowboy Town. 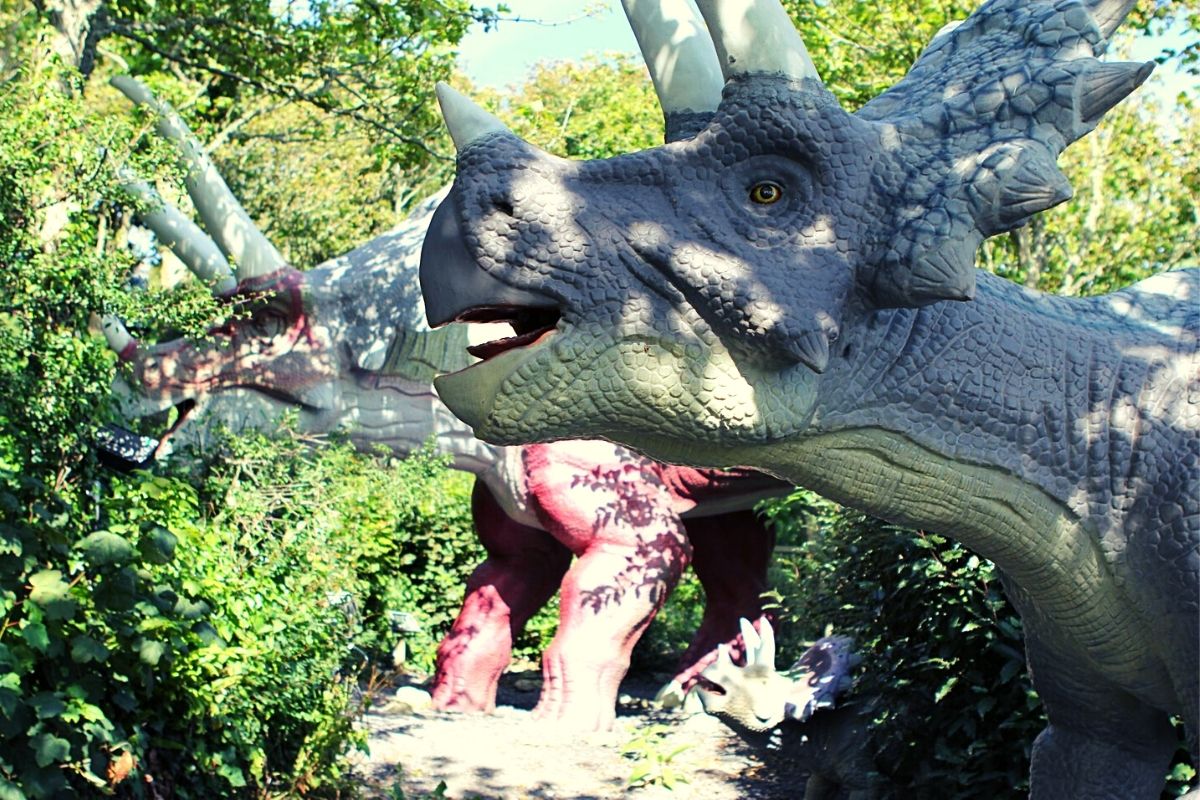 Things to do in Isle of Wight with kids

Take a train ride on the Isle of Wight Steam Railway.

The dinosaur trail has over 30 dinosaurs to spot in lush settings as you wander along a woodland path and there are lots of other rides and attractions. 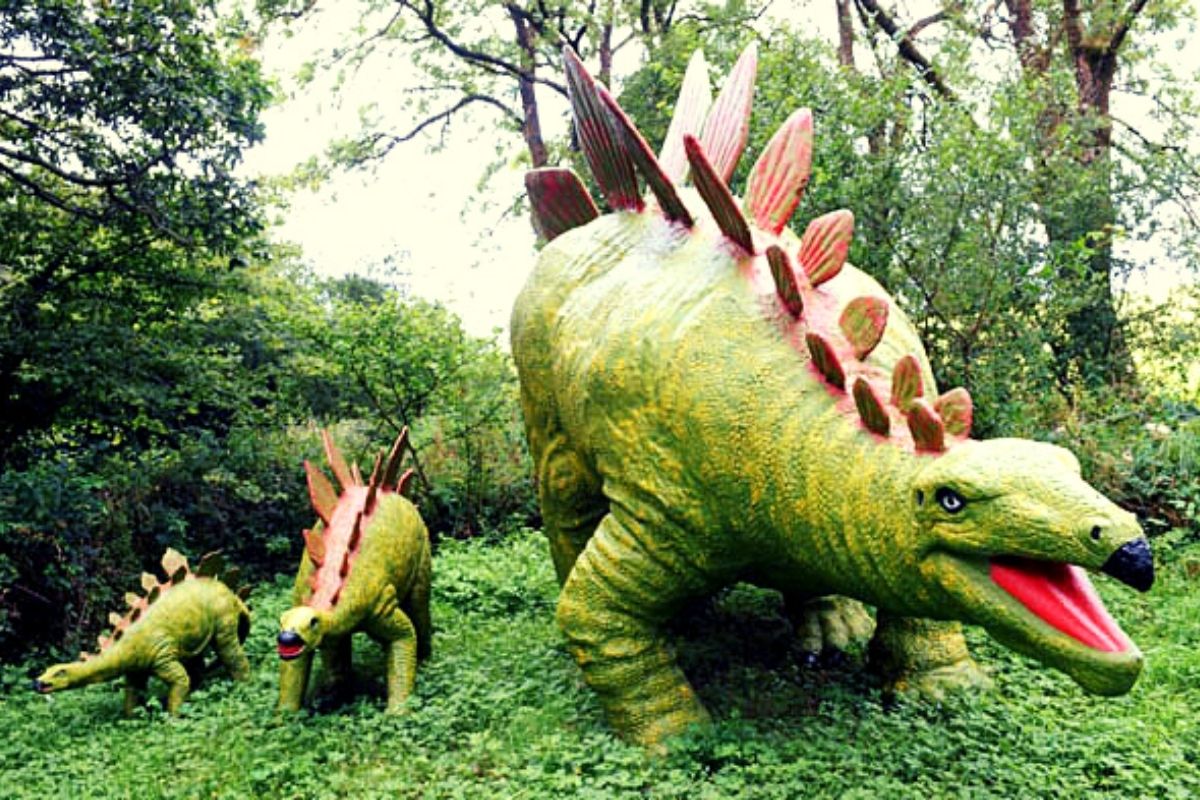 Things to do in Pembrokeshire with kids

Torquay’s Dinosaur World is home to full size and scaled dinosaurs and fossils. You can take part in the explorer quiz and sit on a deadly dinosaur. 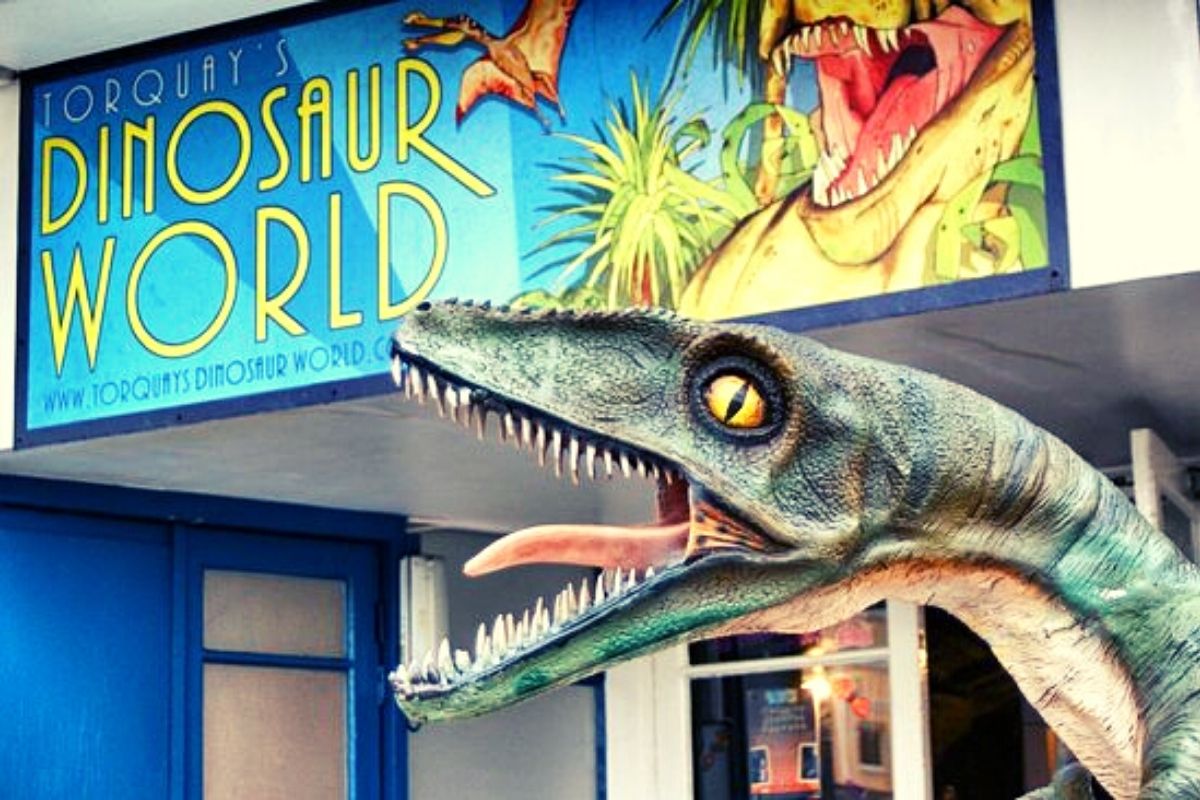 Things to do in Devon with kids

Wingham Wildlife Park in Kent is predominantly an animal park but has a great Dinosaur park. Take a look at their Dinosaur A-Z which gives some really informative information on each of their 22 dinosaurs. 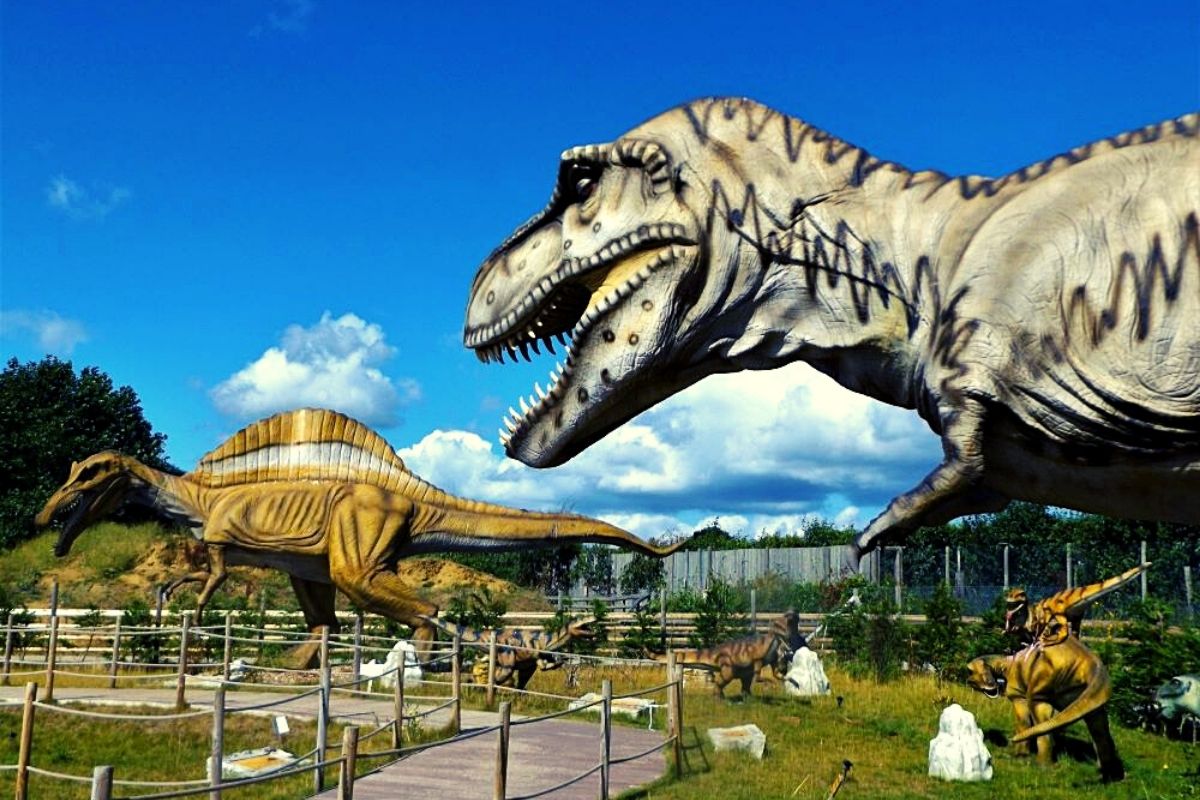 Things to do in Kent with kids

Looking for a few more ideas of things to do in Kent? Why not try…

Explore the beautiful medieval city of Canterbury including Canterbury Cathedral

Visit one of the lovely beaches in Kent (Whitstable, Broadstairs, Margate or Botany Bay), some of the best beaches near London.

Paultons Park is a theme park and home to Peppa Pig World and the Lost Kingdom dinosaur theme park. Here you’ll find Jurassic themed rides including 2 rollercoasters as well as a number of animatronic dinosaurs, some of which wander around the park. 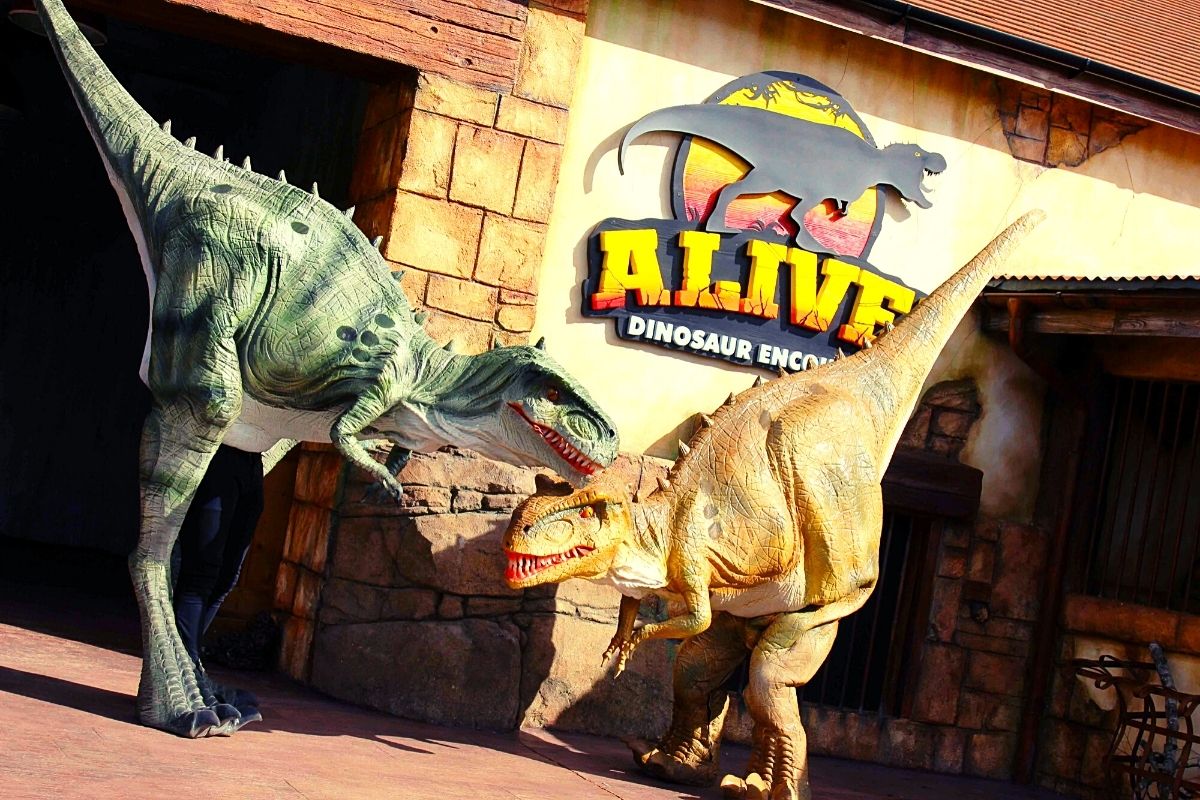 Things to do in Hampshire with kids

Dino Park in Dumfries has 15 dinosaurs in the dinosaur park as well as lots more dinosaur related activities. Hear dinosaur stories in the Dino Den, take a walk through the dark Dino Mine, bounce on the bouncy dinosaur or dig for fossils. If the weather isn’t great, there’s also a dinosaur soft play centre. 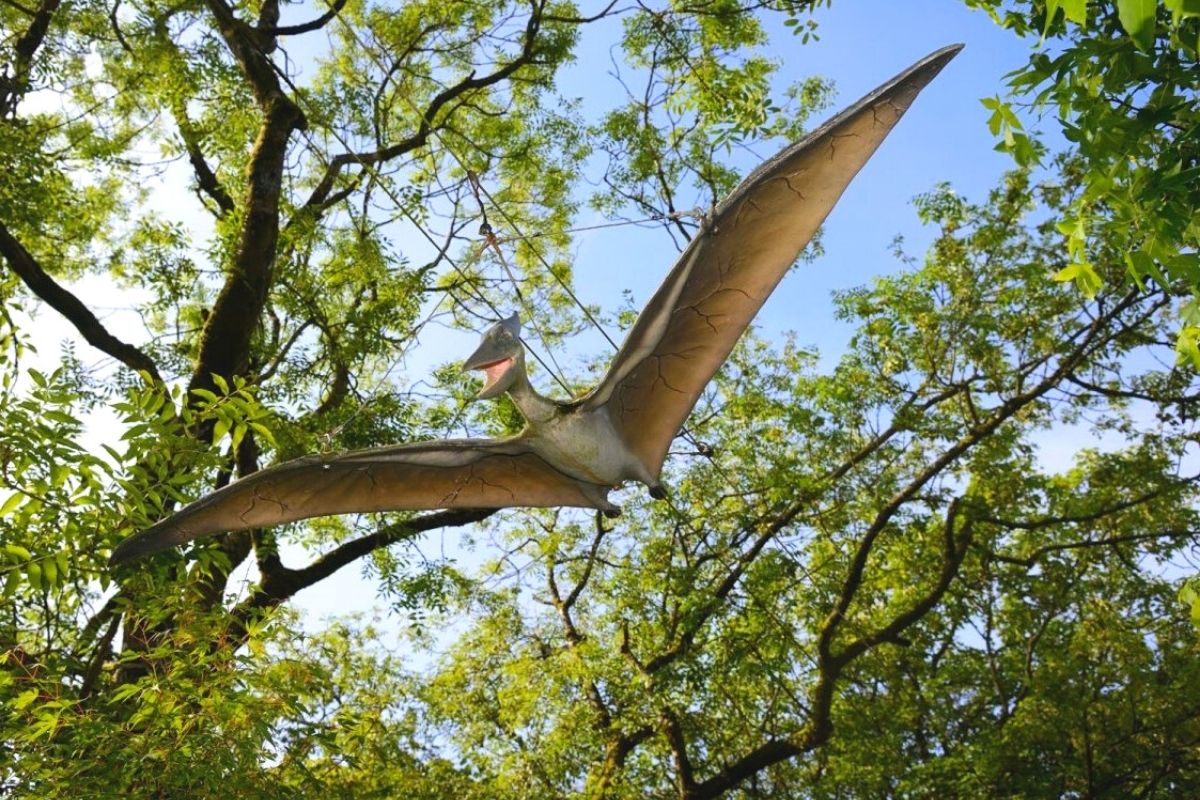 Pteranodon at Dino Park in Dumfries

Things to do in Dumfries with kids

New dinosaur parks in the UK

Godstone Farm in Surrey – The World of Dinosaur Roar.

Jurassic Encounter is touring the UK in 2022.

Best dinosaur museums in the UK

There are so many great dinosaur museums around the UK. They are great places to visit on a rainy day and are highly educational.

Your four year old may know it all already, but we can guarantee you’ll learn a lot!

Some of the museums (the Natural History Museum in London) also have a large moving T-Rex as well as their collection of dinosaur bones and fossils.

Or for something a little different…

The Crystal Palace Dinosaurs is the world’s first dinosaur park, It was created in 1854 with three sculptures.

The statues may be anatomically incorrect, but this is because they were created around the time that dinosaurs were first being discovered and so not a lot was known about them. There are now over 30 statues to visit.

Visit the Jurassic Coast in Dorset or Hunstanton Beach in Norfolk, walk in dinosaur footprints in the Isle of Skye or visit the Isle of Wight for your very own fossil hunting. Always check guidelines on fossil hunting beforehand.

If you happen to find yourself in Alberta, Canada, you might want to visit Drumheller for a dinosaur adventure. It has earned itself the name of The Dinosaur Capital of the World and here you’ll find the Royal Tyrrell Museum, the best dinosaur museum in the world.

We hope you’ve enjoyed our round up of things to do for dinosaur lovers. If you have any more to add – let us know!

Looking for a cheaper alternative to Center Parcs?

A Complete Guide to Visiting Legoland Windsor with Small Kids

A Complete Guide to the Gruffalo Trails in the UK 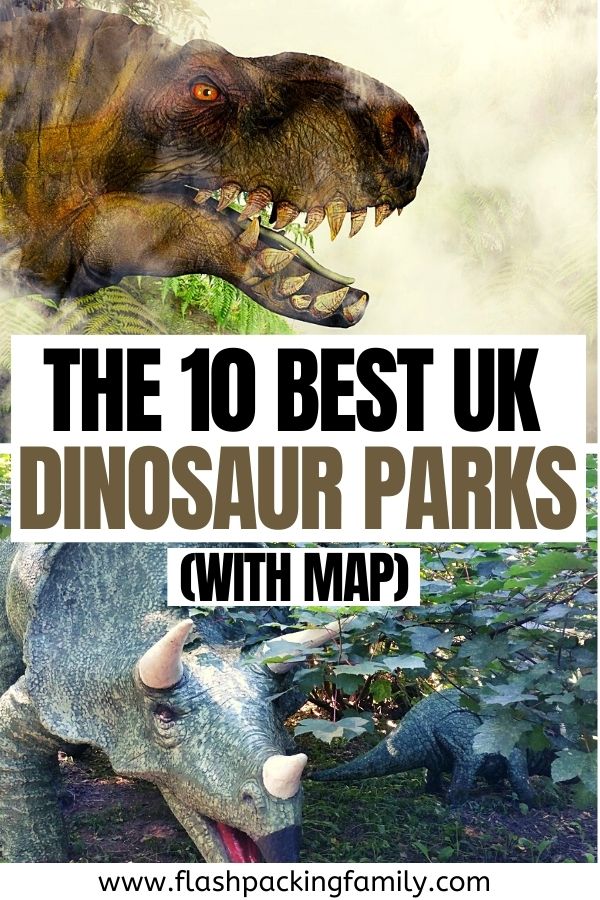 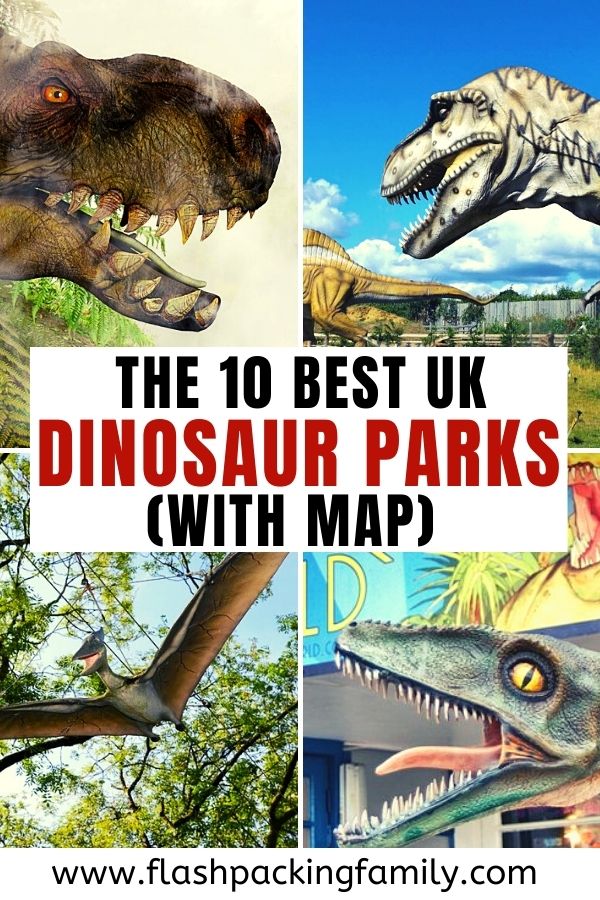