Why go on safari with kids?

If you’ve never been on safari with kids but love the idea of it, we highly recommend it for a number of reasons.

Why go to South Africa on safari with kids?

Having been on safari in quite a few countries across eastern and southern Africa, we recommend South Africa as a great place to go on safari with your family for a number of reasons.

An African safari is one of our favourite things to do in South Africa so we decided to recommend the best family-friendly safaris in South Africa. These are ones that we have done ourselves and have got the big thumbs up from the kids.

We have put our top picks in ascending price order.

Addo Elephant National Park is located about 60km from Port Elizabeth in the Eastern Cape. If you are going to self-drive, all you need to pay is the entrance fee which makes it a really economical safari experience. 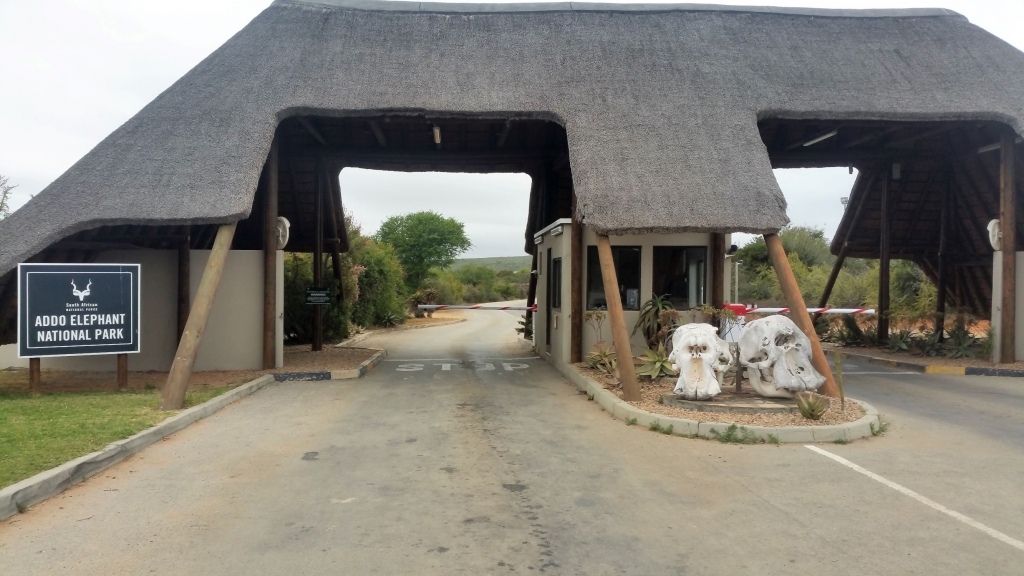 Addo started out as an elephant park back in 1931 with just 11 elephants and was set up to protect the remaining Addo elephants from being completely wiped out by hunters and farmers.  If elephants are your thing (or your child’s thing) – you will not be disappointed with Addo because they are everywhere! 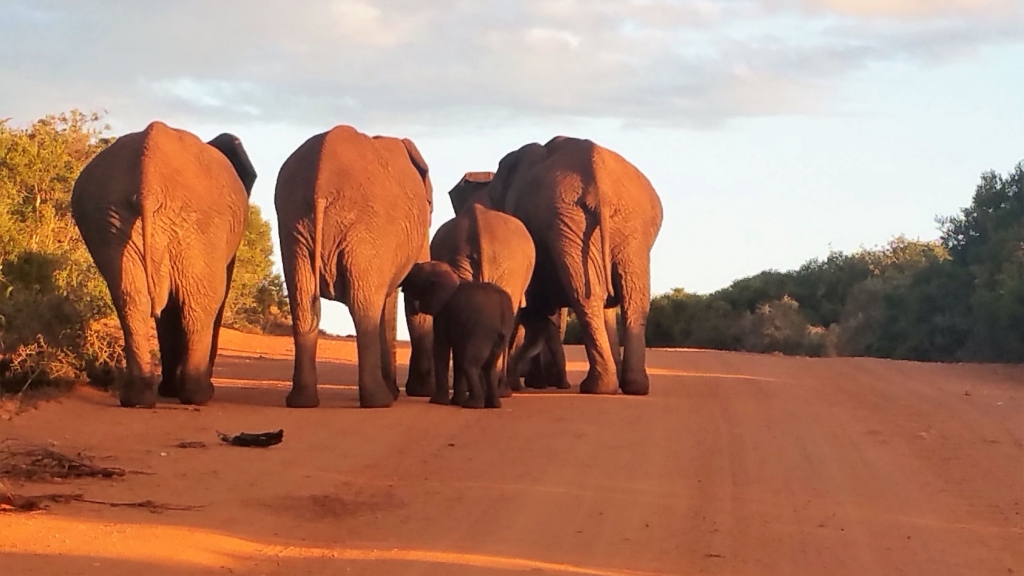 We were in the park a good 30 mins after closing time because we got stuck behind a family meandering up the hill to a watering spot. We didn’t want to pass because they were clearly protecting their baby, so we hung back. We were worried we would be locked in but the ranger found us and told us we could take our time. It was amazing watching them with nobody around as the sun was setting.

In 2003 they introduced six lions to the park. They now have around fourteen, although we didn’t see any on our drive. Our chances of seeing them may have been improved on a guided safari, but we were happy doing our own thing on this occasion. If you want to book a guided safari, make sure to do it well in advance through SanParks as they get booked up.

If you are venturing further north or you fly into Johannesburg and are keen on doing a safari, you wouldn’t want to miss an opportunity to visit the Kruger National Park. It’s an enormous national park relatively close to Johannesburg that borders Mozambique to the east and Zimbabwe to the north.

You can self-drive and stay at relatively inexpensive campsites within the park which is why we have put this second. There are also some eye-wateringly expensive luxury lodges. If you’re looking for a luxury safari experience in the Kruger, here is a list of the most family-friendly accommodations in the Kruger National Park.

We stayed at an inexpensive campsites located within the park in our own tent, but there are also chalets equipped with bedding. You can check on the SanParks website for more info. Some of the campsites have pools which were great for relaxing and cooling down between morning and afternoon safaris, especially when temperatures were reaching 40 degrees. We stayed at the Malelane campsite and Lower Sabie (with pool). 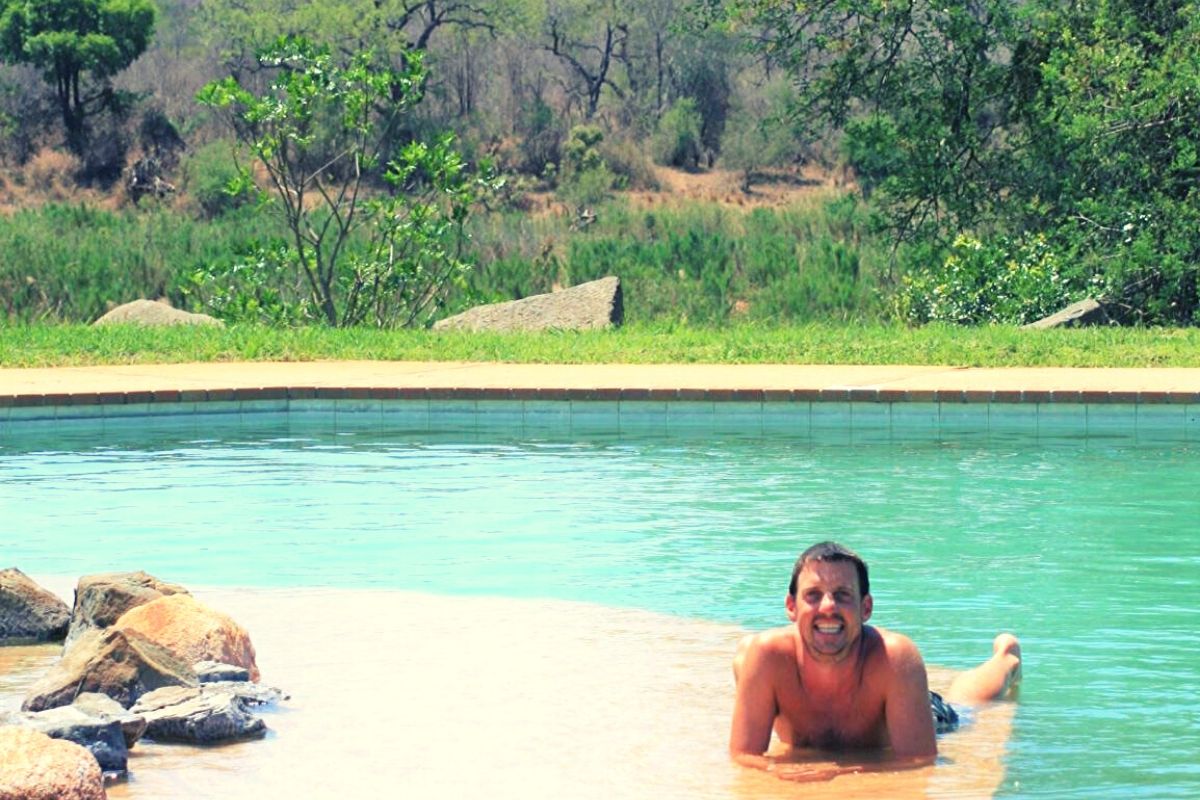 We entered via the Malelane entrance. Within two minutes of passing through the gates had a very close encounter with a rhino. We saw him to our left as we were driving and he was not slowing down so we sped up a little to get out of his way. The rest of the game viewing was just as spectacular. 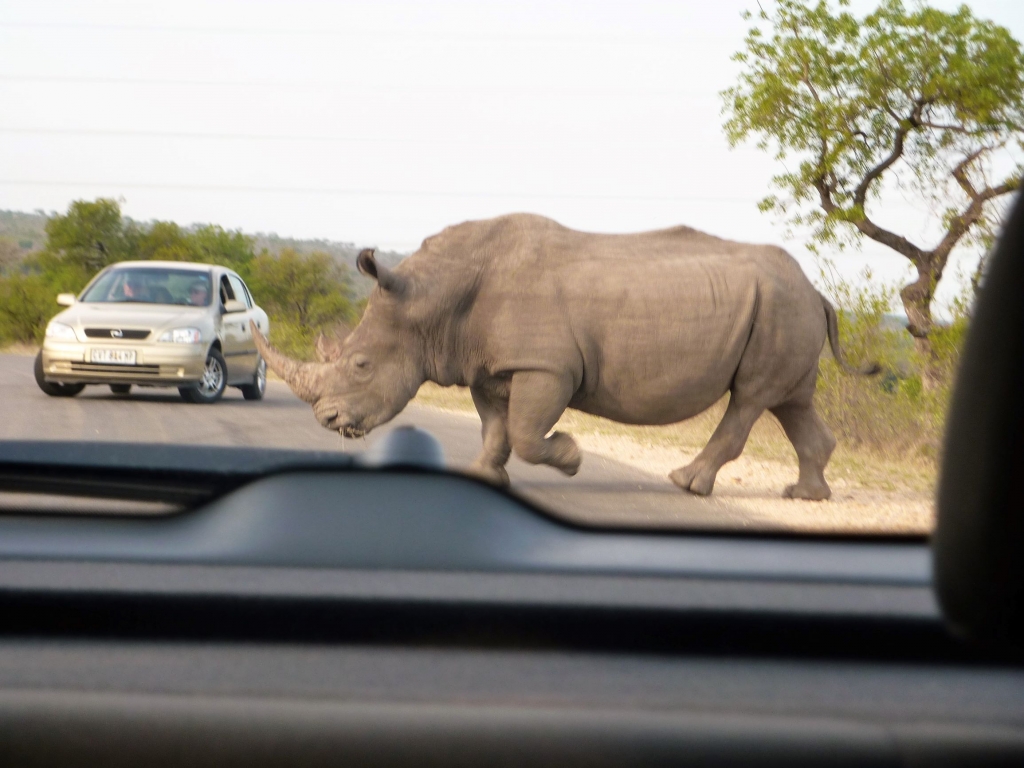 Our close encounter with a rhino in the Kruger

The Kruger National Park currently advises that people take anti-malarials because of recent cases of malaria but you should check the situation before you go as it can change.

For prices, it’s best to check with the lodge because they have various different packages available.

Buffelsdrift is just outside the town of Oudtshoorn. We stayed in a traditional (but quite luxurious) family safari tent. It had 2 bedrooms separated by the bathroom (with claw foot bath, double sinks and outdoor shower) and a lovely veranda that looked out over the lake and the hippos. The perfect spot from which to enjoy a sun-downer! 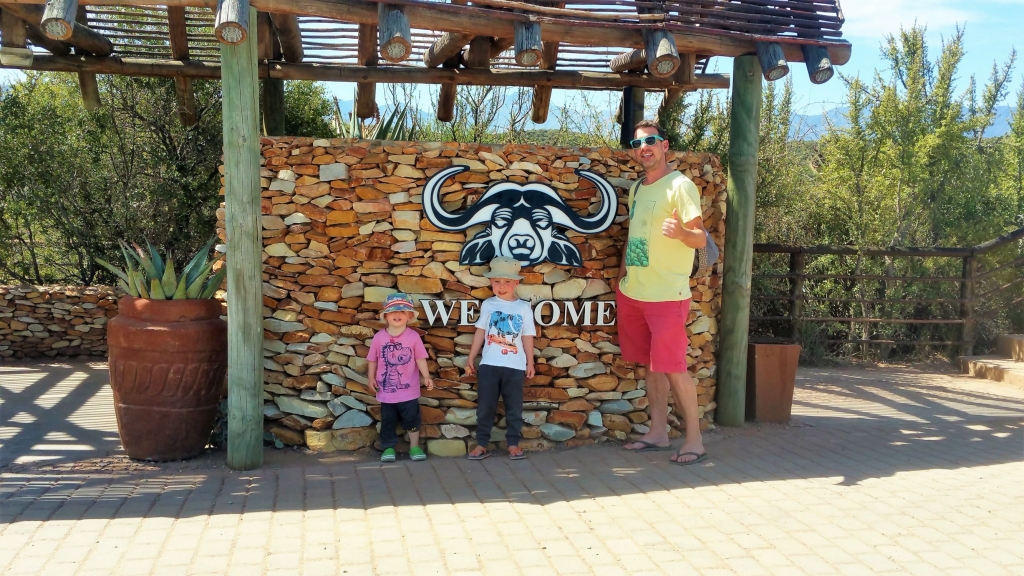 We went for the half-board option and chose a game drive and elephant experience. Buffelsdrift wa a great choice because it was conveniently on our route to Oudtshoorn to visit the Cango caves and crocodiles. It was a bit cheaper than some other private game reserves because it doesn’t have the Big 5 animals. They have a lot of wildlife wandering between the tents, such as Nyala and during breakfast and dinner by the lake, we would see hippos. 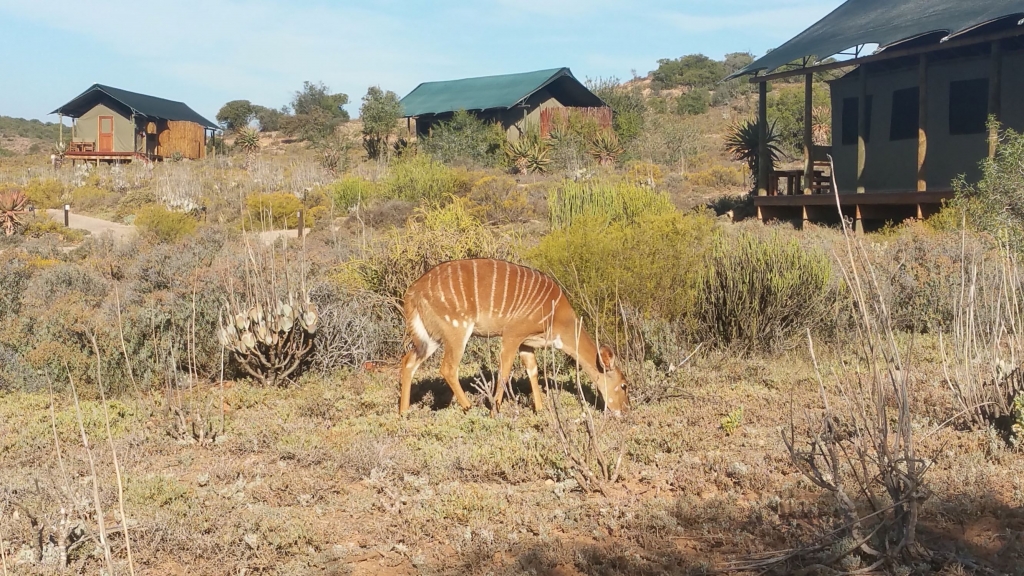 Nyala wandering between the tents

There was also the option of elephant, meerkat or lion experience. We opted for the elephant experience – and it certainly was an experience! 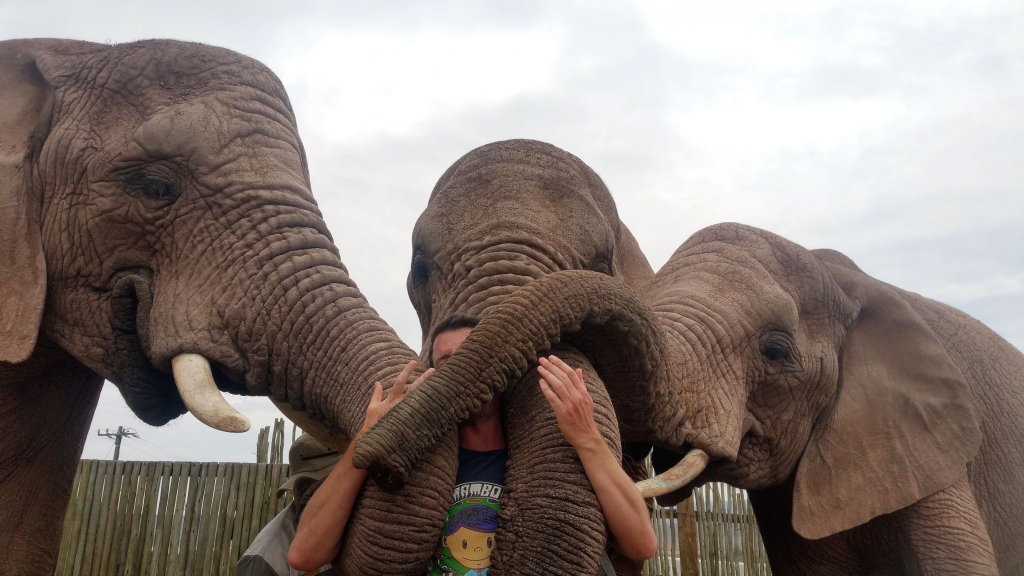 Another relatively inexpensive safari option if you want the safari tent accommodation and guided game drive is Chandelier, also near Oudtshoorn. They don’t have the big 5, but they do have a huge area to explore on foot which the kids loved. There was a giraffe feeding experience where you can buy food and hand feed them at breakfast time. We just did one night here on the way back down the Garden Route. 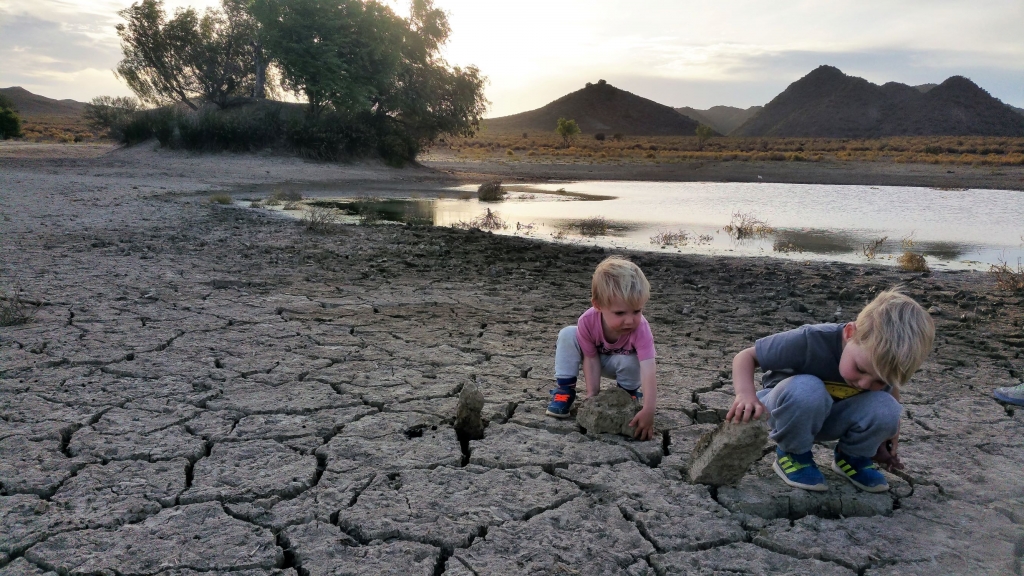 The boys exploring the interesting landscape at Chandelier

Price – check with the lodge

Kariega is situated in the Eastern Cape, about 40km from Grahamstown (and about 150km from Port Elizabeth) and incorporates both the Bushman’s and Kariega rivers. We love that Kariega is family-friendly because it is built on the land that was once owned by the boy’s great, great, great, great, great grandfather, Jeremiah Goldswain. He was one of the original English settlers in 1820 and the remains of his house can be seen on the Kariega land. 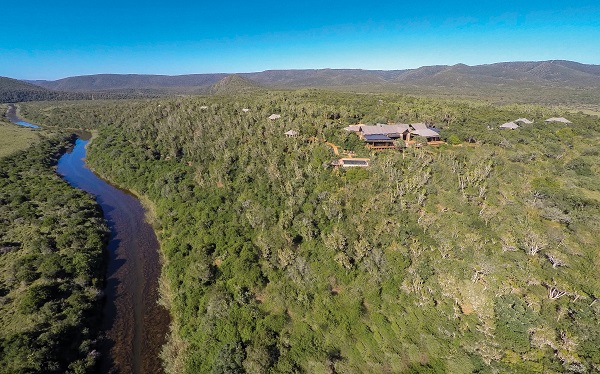 Kariega sitting above the Kariega valley

One of the great things about Kariega is that they run a daily kids programme between 11am and 2pm, offering guided trails in the bush (within the boundaries of the Main Lodge), identifying animals and animal related arts and crafts. It is fun and educational.

Children can accompany their parents on game drives, although children 5 and under is at the ranger’s and general manager’s discretion based on a safety assessment. If they can’t accompany you, there is a babysitting service. 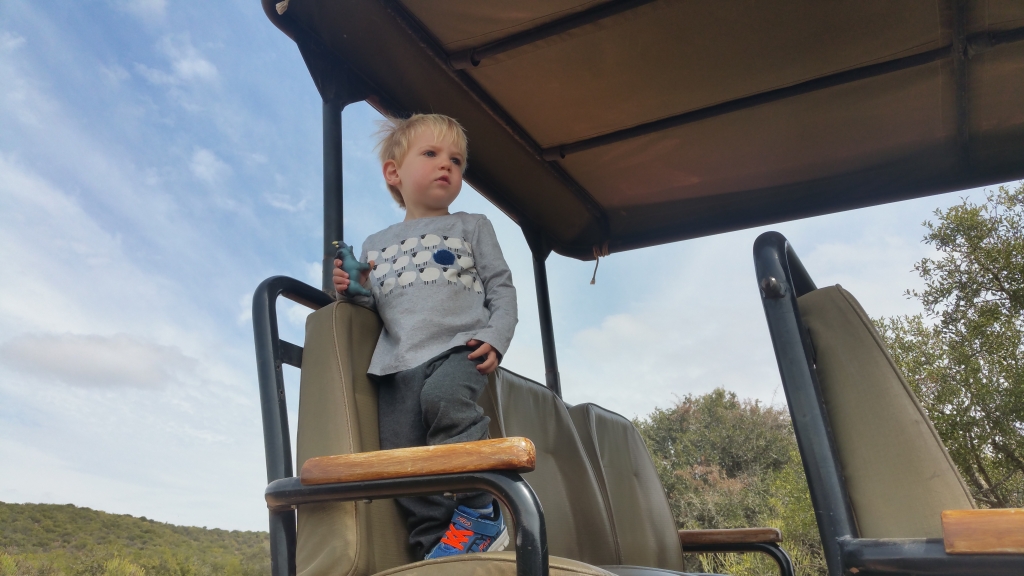 George ever on the look out for animals

There’s a play area in the Main Lodge, which is also where dinner is taken. If the kids have finished their meal, they can go and play, leaving you to enjoy a meal in peace .

If you are staying with children under 10, you will only be able to stay in the Kariega Main Lodge (log chalets). They’re super cosy and some have private pools with a great deck overlooking the Kariega valley for sun-downers! Kariega is extremely warm and welcoming and you will definitely enjoy your stay here.

Price – check with the lodge

Shamwari is located around 75km from Port Elizabeth and is easily doable if you are driving the Garden Route. It’s one of the world’s leading safari and game reserves and works hard in the areas of conservation and environmental education. Shamwari is also famed for having had Mrs Thatcher and Paris Hilton among its clientele! 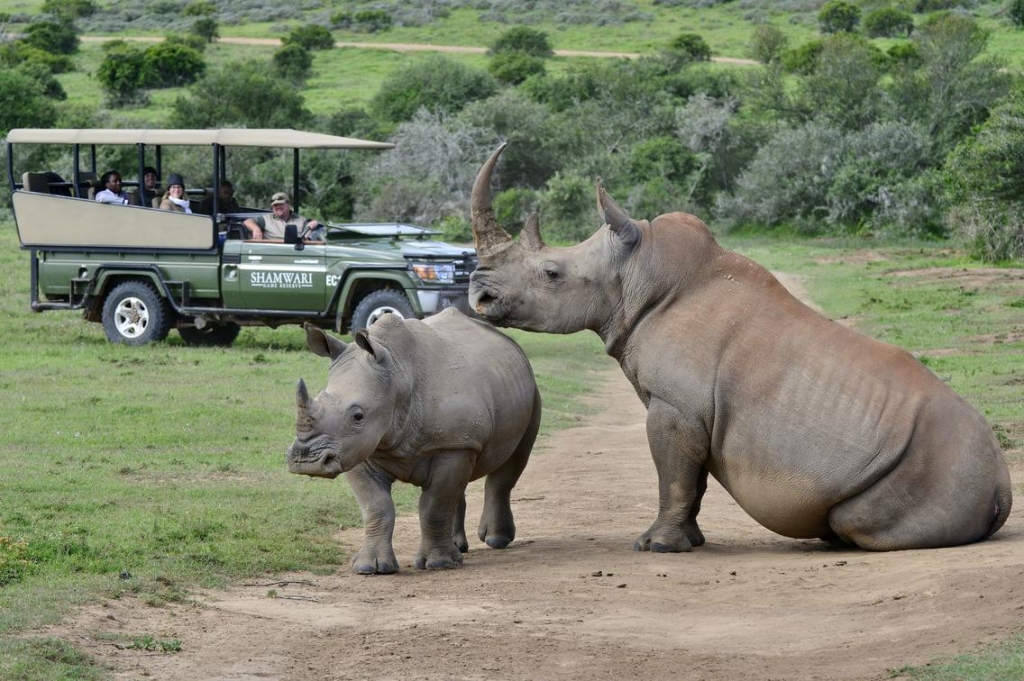 There are two family-friendly lodges at Shamwari (Shamwari Riverdene and Shamwari Sarili) and a large main pool with shallow end for children. 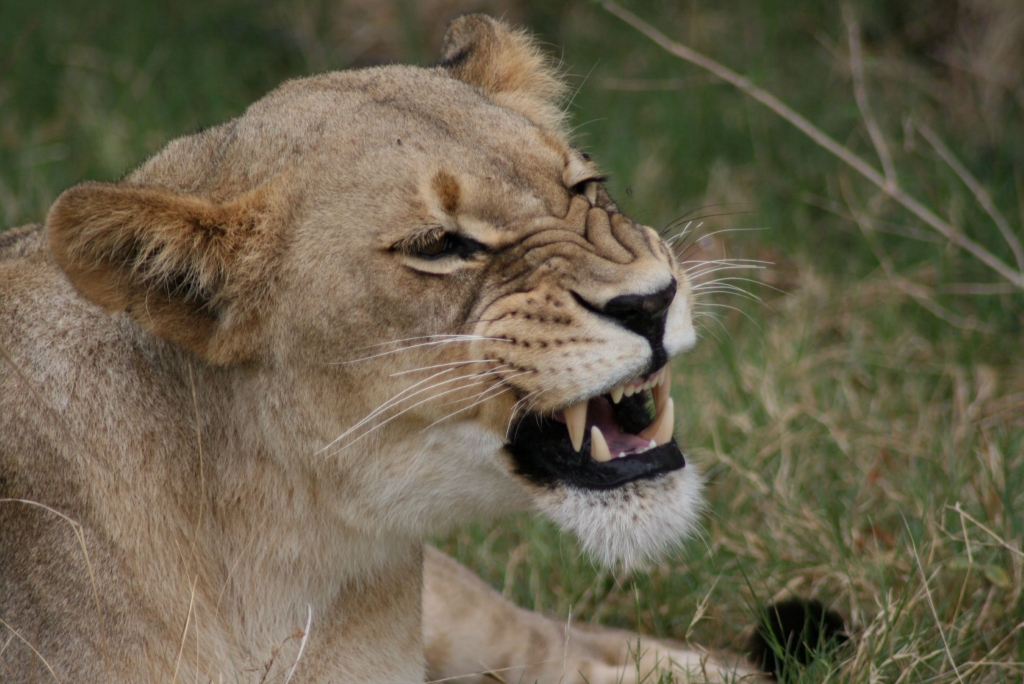 Getting up close with the lions in Shamwari

It’s getting into the very expensive bracket but it’s truly a 5 star experience and you will be very well looked after! We haven’t stayed with kids but have visited prior to having the kids and loved the set up there. Children under 4 aren’t permitted on game drives but there is a childminding service. There’s a great activity centre for kids where they can zip line, wall climb and access tree houses with interconnecting walkways. Arts and crafts are also offered in the kid’s centre. 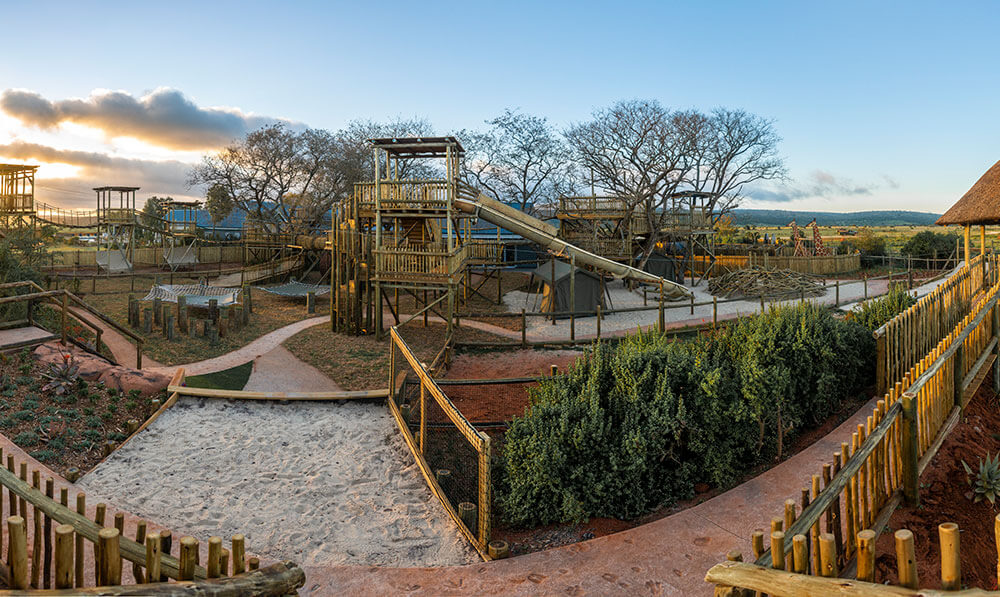 We hope this has given you some inspiration to add a safari to your South African itinerary. For more information check out our what to take on safari post and tips for wildlife spotting on safari.

Looking for general accommodation in South Africa? Check Booking.com for a huge selection of properties to suit every budget.


If you enjoyed reading this post, why not bookmark it or pin it for later? 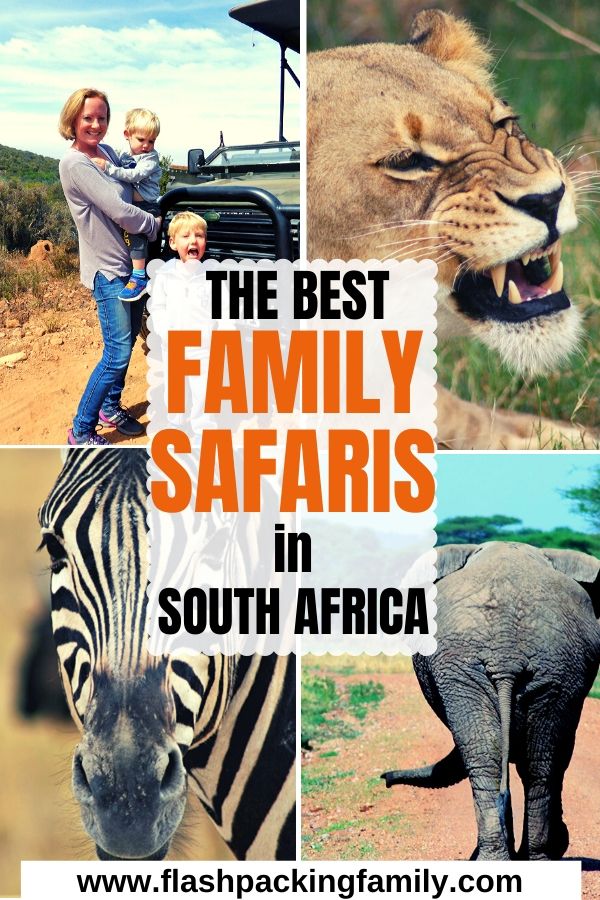 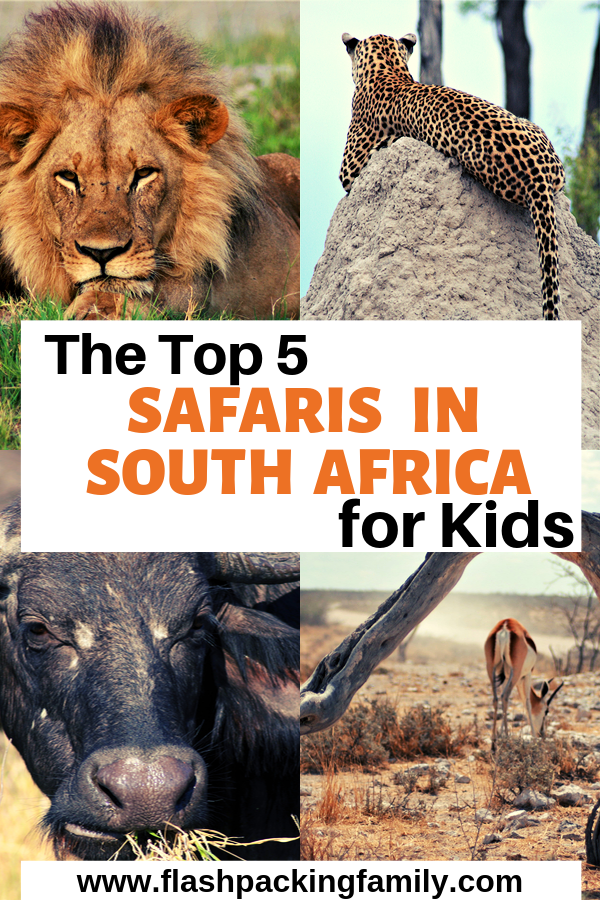 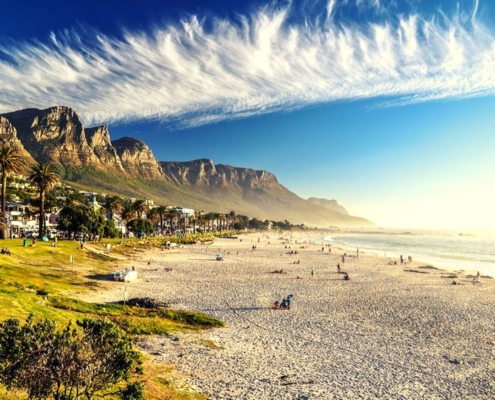 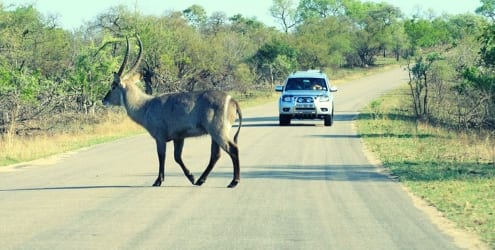 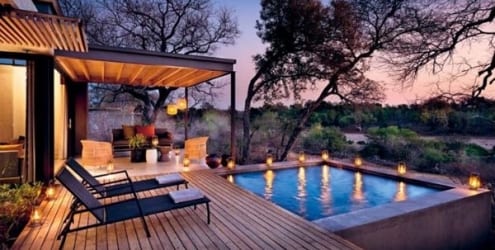 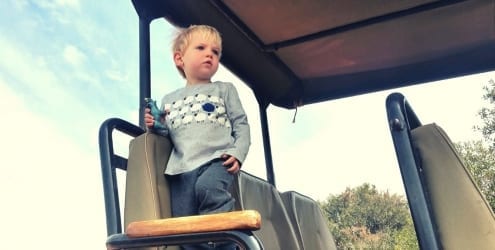 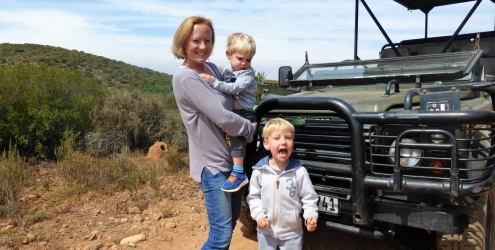 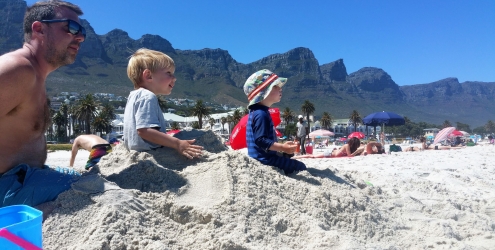 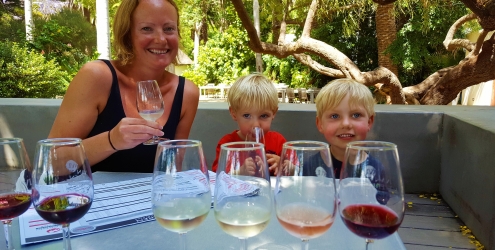 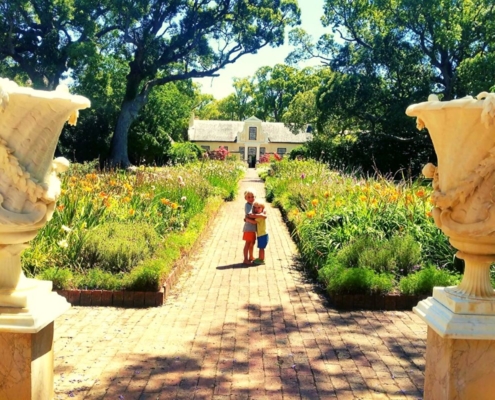 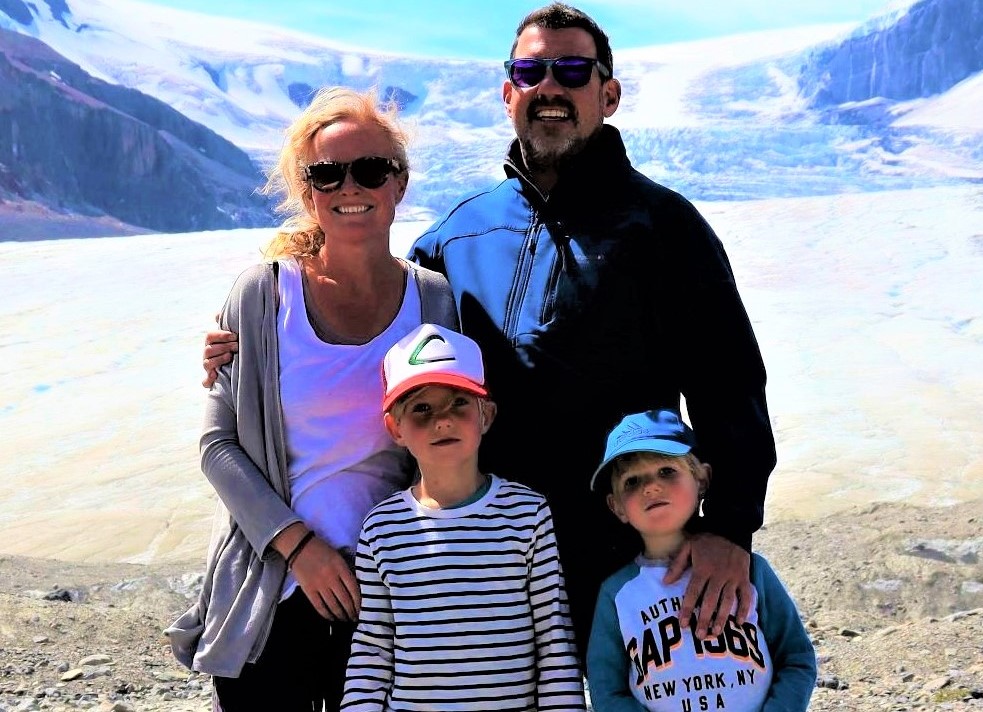 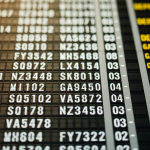