With Harry Potter being the best selling book series in HISTORY with over 500 million copies sold worldwide, it is only natural that there would be a whole host of amazing Harry Potter experiences too.

Our kids are 6 and 7 and just getting into the wizarding world so I decided to take a look at a the Harry Potter experiences we could do together as a family and my word there’s a lot of choice!

This post contains affiliate links. Should you buy something from one of them, we may earn a small commission but this is at no extra cost to you. 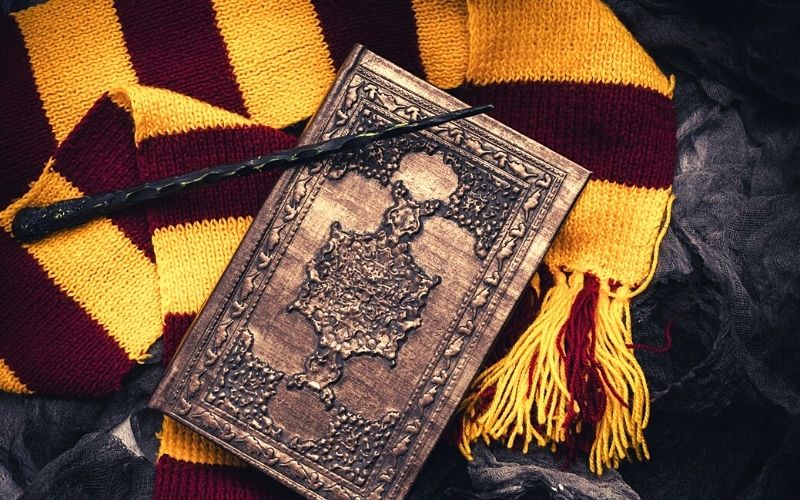 Harry Potter World London is probably the experience that most people have heard of, whether they are a Harry Potter fan or not. It is a multi-award winning tour so it seems only right to start our own tour of Harry Potter experiences in the UK with it.

The Warner Bros. Studio Tour provides a complete and immersive Harry Potter experience all about the making of Harry Potter. So what is the Harry Potter tour like? Well, first off, it’s not a tour as such.

You’ll get to wander through the studios without a guide and visit film sets, see props that were used in the movies and learn about special effects. There are also interactive activities along the way.

If you’re visiting London at Christmas, you can experience a Harry Potter Christmas at Hogwarts in the Snow (from 3rd December to 17th January 2021). Don’t forget to also check out the London Christmas lights if you’re doing a walking tour. It’s a lovely thing to do at Christmas with kids.

Did you know that there is a Wizarding World of Harry Potter in Florida? It’s one of the best things to do in Florida with kids!

Getting to the Warner Brothers Studios

Many people search for the Harry Potter studio London but it is actually not in London, it is in Hertfordshire, just a little outside of London. If you have a car, there is a free carpark on-site. You can also take a direct train from central London (Euston) to Watford Junction. From there you can take a shuttle bus to the studios.

You must buy Harry Potter tickets in advance. This is one of the most popular tourist attractions in the UK and sells out well in advance. Click here for Harry Potter World tickets or if you prefer, you can book a package including transfers from London using Get Your Guide. 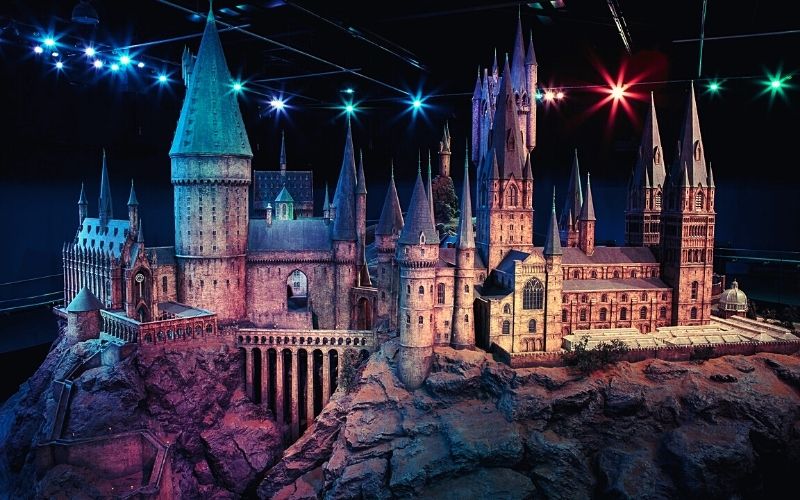 Perhaps the next most well known Harry Potter London experience is the Harry Potter Kings Cross Platform 9 3/4 recreation. For years commuting into London I would walk past and not really give it much thought.

There was never a queue of people when I strolled past on the way to work at 7.30 am (or back to the train after a night out) but now when I want to take the kids, there is always a huge queue!

So, either get here very early if you want to avoid queuing or expect a bit of a wait. The trolley is there 24/7 but the only issue with going at unsociable hours is that a) you won’t get to take a picture with the flowing Harry Potter scarf because there are no employees there to provide you with this prop and b) you will need someone there with you to take a photo as their professional photographer will not be there. 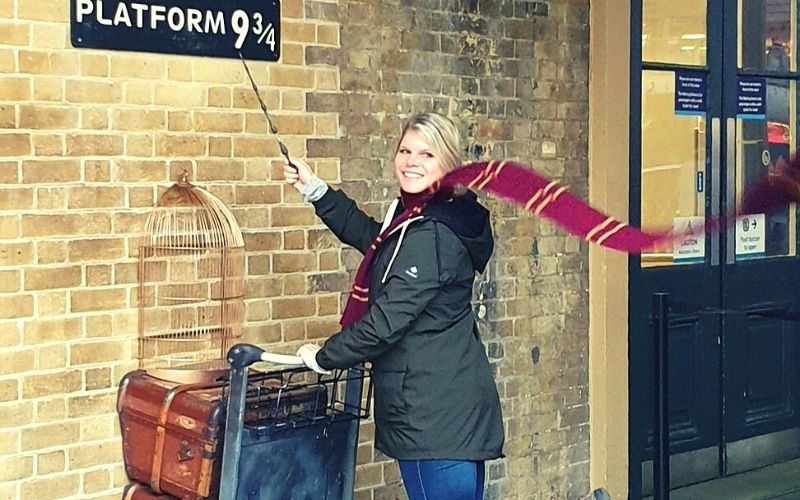 Cutter and Squidge – for an immersive afternoon tea for wizards in the Potion Room.

The Georgian House Hotel – the afternoon tea is positively wizardly. Even the website cursor is a Harry Potter wand. 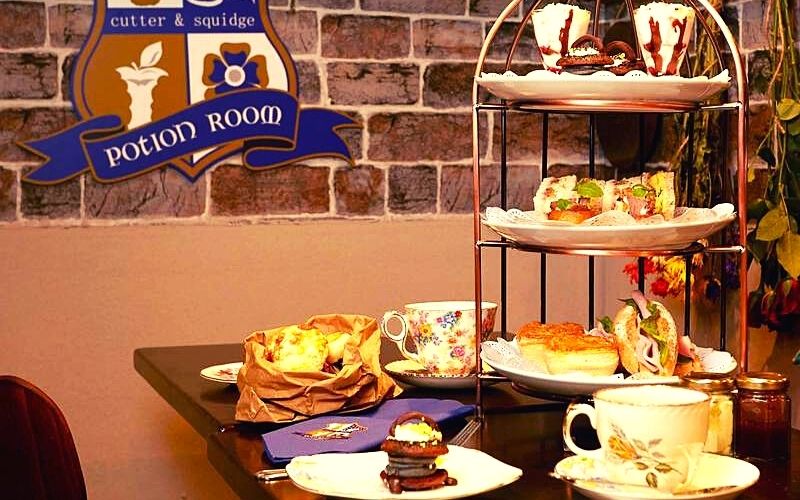 The Harry Potter Muggles Walking Tour is rated as one of the best walking tours in London for Harry Potter fans. You set off from Monument Station and are taken on a walking journey through London to where the world of muggles and wizards meet. Your guide, a real life witch or wizard, will entertain you with Harry Potter stories and you’ll see secret places along the way.

The company is running private tours currently to adhere to government guidelines. The tour lasts about 2 hours and currently costs £90.00. If you are not able to take the tour, they also have a virtual tour available. 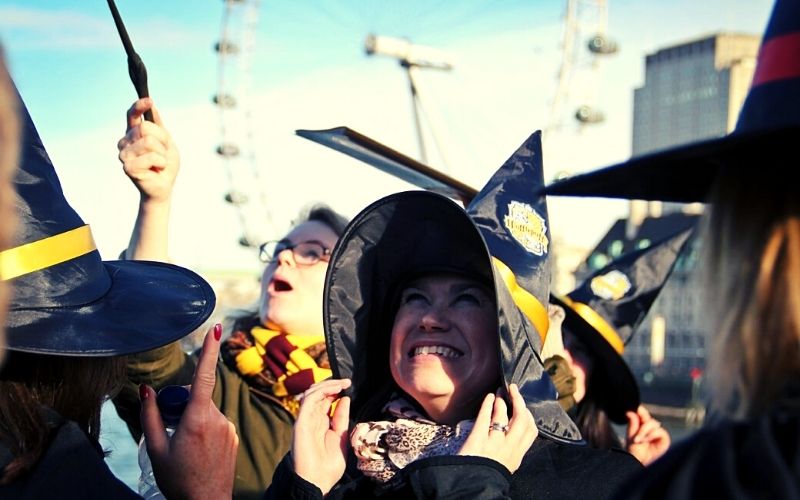 Harry Potter and the Cursed Child has been running at the Palace Theatre on Shaftesbury Avenue since the summer of 2016. It has won a record nine awards and is one of the most popular shows in the West End.

Performances have been suspended until 21st February 2021 but you can take a sneaky peek at the Harry Potter London show trailer here:

If you want to do your own walking tour at your own pace, here are some of the Harry Potter film locations in London that you can visit. This is a lovely (and free) way to spend a day in London.

Leadenhall Market – where the Diagon Alley scene from the Philosopher’s Stone was filmed (when Harry was first introduced to the wizarding). Look out for the blue optician’s shop at 42 Bull’s Head Passage which was used as the entrance to The Leaky Cauldron.

Australia House – The scenes inside the Gringotts Wizarding Bank were filmed inside Australia House. Although not open to the public, you can take a peek through the glass doors (weekdays only) at the impressive marble interior and great chandeliers.

King Cross Platform 9 3/4 – although there is a Platform 9 3/4 (mentioned above), the station scene in The Philosopher’s Stone was actually filmed between platforms 4 and 5 at Kings Cross Station. The impressive red brick exterior of Kings Cross St Pancras station was also used.

Millenium Bridge – used in the filming of the Half Blood Prince

London Zoo – the reptile house was where Harry Potter started talking in to the python before he knew he was a wizard.

Piccadilly Circus – used in the filming of the Deathly Hallows I where Harry, Hermione and Ron are fleeing from the Death Eaters. 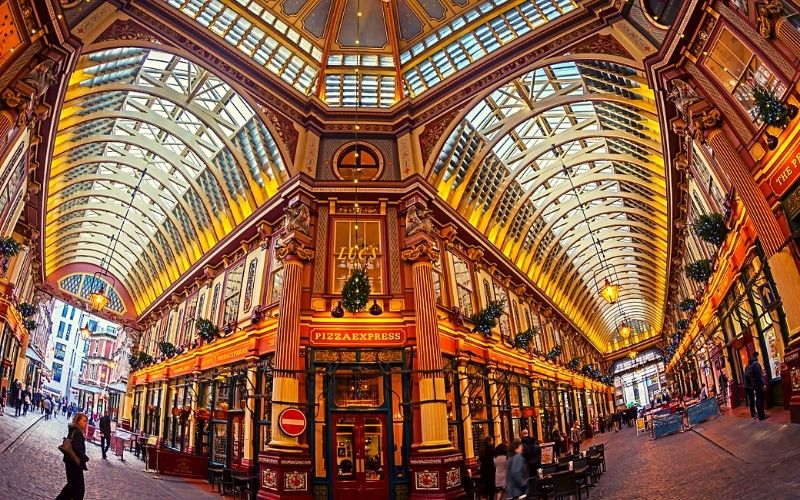 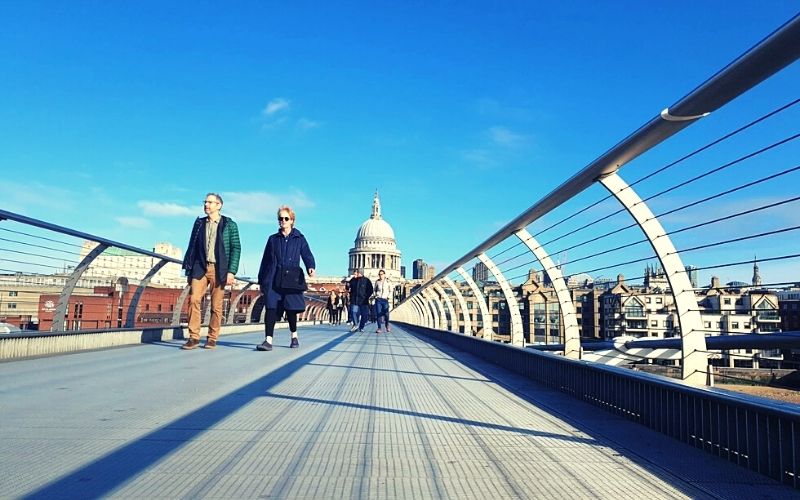 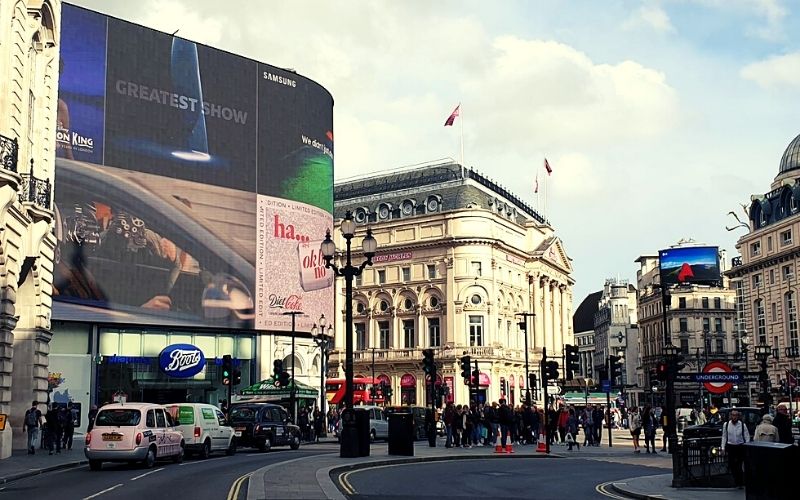 Fancy getting locked in a Harry Potter themed room for 60 minutes and having to work as a team solving Harry Potter clues to escape? Sounds like fun to us. Check out Enigma Quests’  School of Witchcraft and Wizardry. No age limit but recommended age is 9+.

Harry Potter doesn’t have to be all about the kids. If you find yourself on a child free day out in London, why not pop into The Cauldron where you can mix cocktails with a difference. They can also be found in New York, Edinburgh and Dublin. 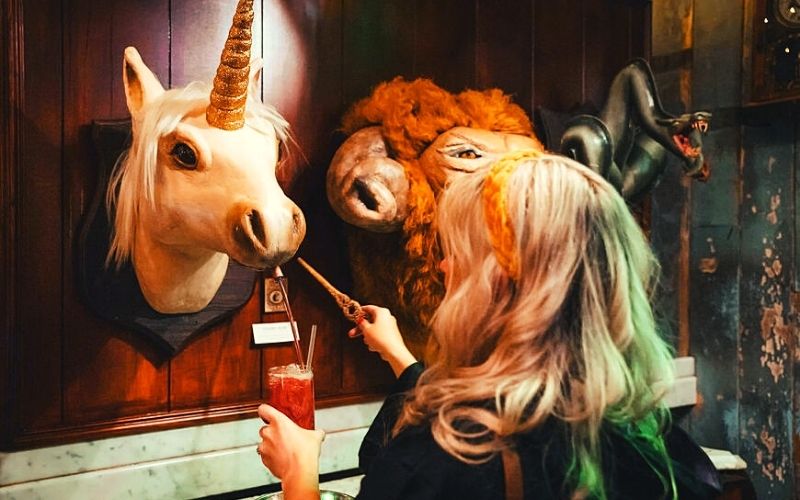 Mixing potions at the Cauldron in London | Photo credit: The Cauldron

The Wands & Wizard Exploratorium shop in London is a fabulous place to take the kids. They have various different events running through the year. It’s a great place to go if you’re looking for something to do at Halloween.

You can try your hand at making your own magical wand.

The Jacobite Steam Train (otherwise know as the Hogwarts Express, Hogwarts train or the Harry Potter train Scotland) has been described as the greatest railway journey in the world. It is a must for all Harry Potter enthusiasts visiting Scotland – although you don’t have to be a die-hard Potterhead to appreciate it. It is a fabulous experience for anyone.

The Jacobite train leaves from Fort William and takes you on a 41 mile (65 km) journey through the incredibly scenic Scottish countryside and, of course, over the Glenfinnian viaduct (aka Harry Potter Viaduct).

If you don’t want to take the train, you can just go and watch as it passes. The train crosses the viaduct twice a day; once at 10.15 am and again at 3.15 pm (although check their site in case of changes to timetable). 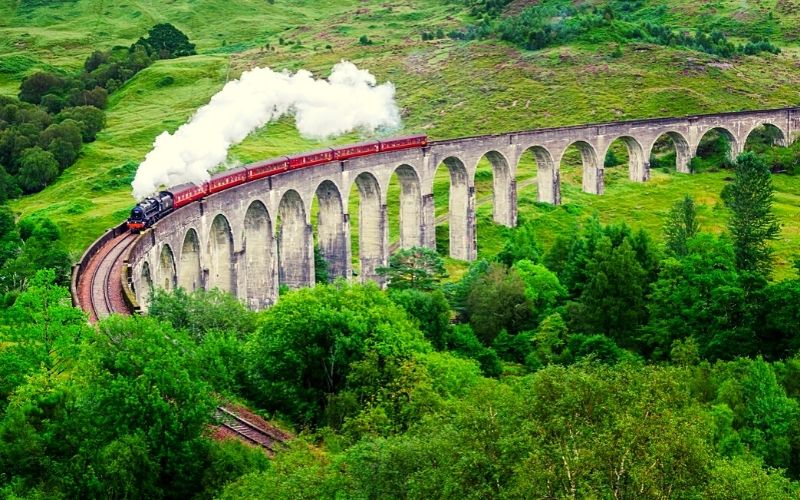 The Jacobite (aka the Harry Potter Train)

Edinburgh is also an important location in the world of Harry Potter. It all began in Edinburgh with J.K. Rowling drawing inspiration from the fabulously historic Scottish capital and where she wrote the Harry Potter books.

Some important sites around Edinburgh are: 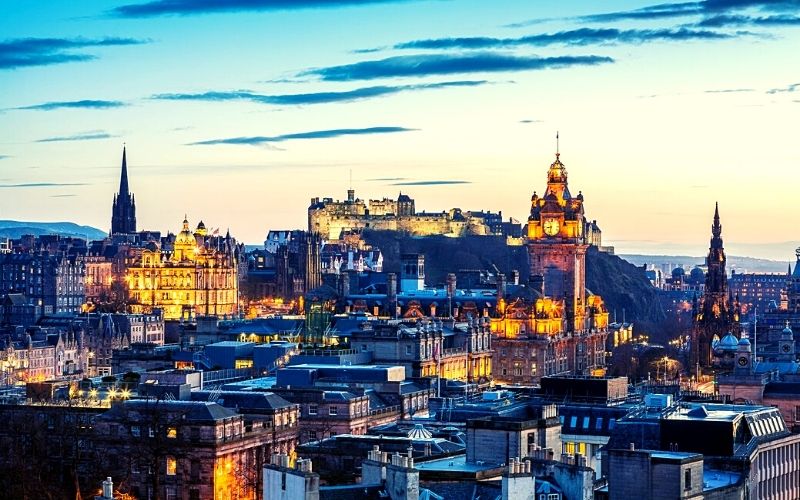 The Edinburgh skyline at dusk

There are a number of walking tours you can do. Some are guided tours but using the information above, you can also do self-guided Harry Potter tours of Edinburgh. Here are some ideas for guided tours:

The Potter Trail (they also have a virtual tour)

Get Your Guide has a number of tours available –

The most notable film locations in Scotland that you can put on your Scotland itinerary are: 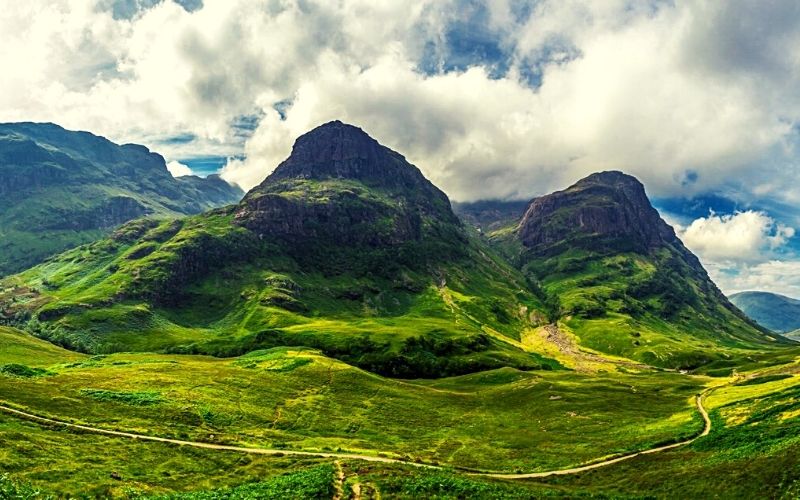 There are also also several guided tours you can take. 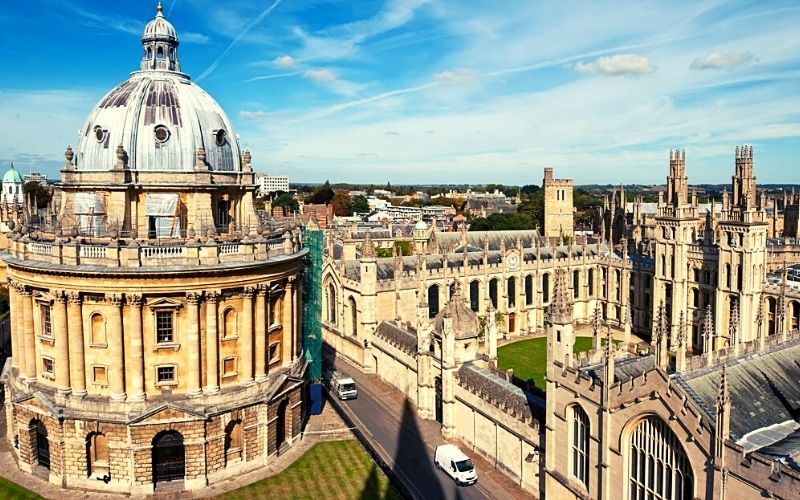 Alnwick Castle, one of the most impressive castles in England, is also know as Harry Potter Castle. Much of the Philosopher’s Stone and the Chamber of Secrets was filmed on location at Alnwick Castle. The Outer Bailey is where Harry and his friends learned to fly broomsticks and play Quidditch. Harry and Ron also crash landed their car in the Inner Bailey where much of the general goings about was filmed. 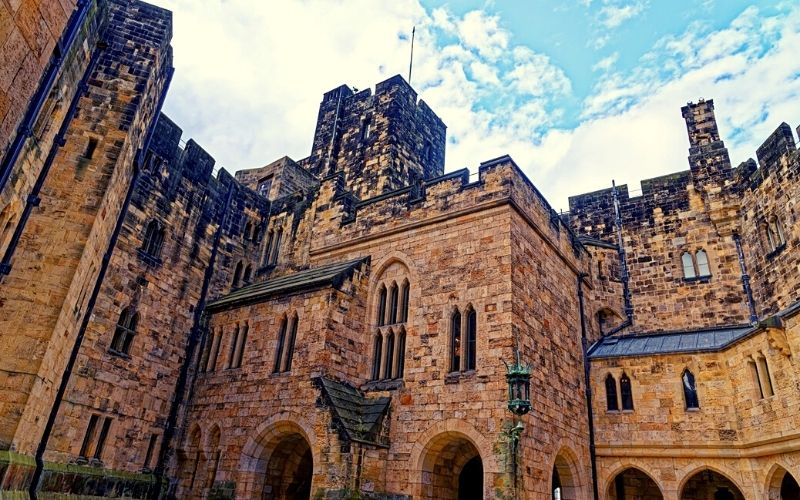 The magnificent Gloucester Cathedral cloisters were used for the filming of the Hogwarts’ corridors in the Philosopher’s Stone and the Chamber of Secrets.

You can visit the catheral from 10 am to 5 pm Monday to Saturday and from 12 pm to 5 pm on Sundays. 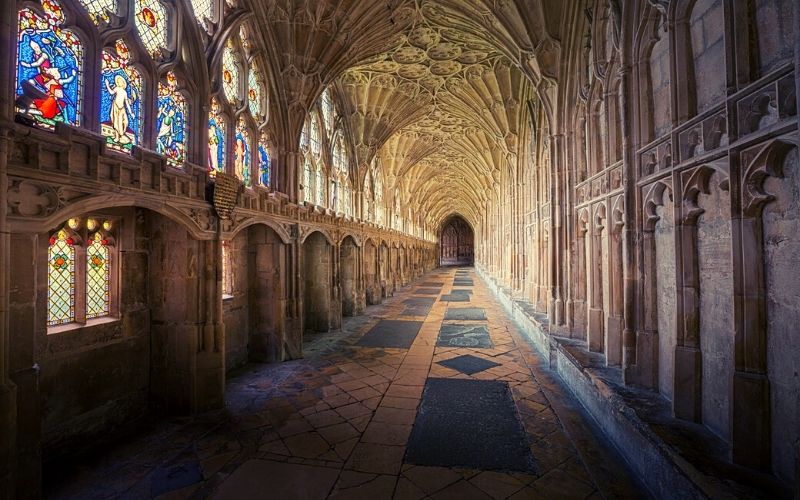 If you would like to stay overnight in Harry Potter themed accommodation, here are a few suggestions for you.

The Enchantment Chamber is a one bedroom, wizard themed apartment in the centre of York.

DeVere House -Godrick’s Hollow where Harry Potter’s parents were murdered by Voldemort is actually a beautiful cottage in Lavenham and you can book through Airbnb.

The Balmoral – this is where J.K. Rowling would stay when she was writing the final book in the series.

The St Pancras Renaissance Hotel – the entrance of the hotel was used as the entrance to the station in the Philosopher’s Stone. 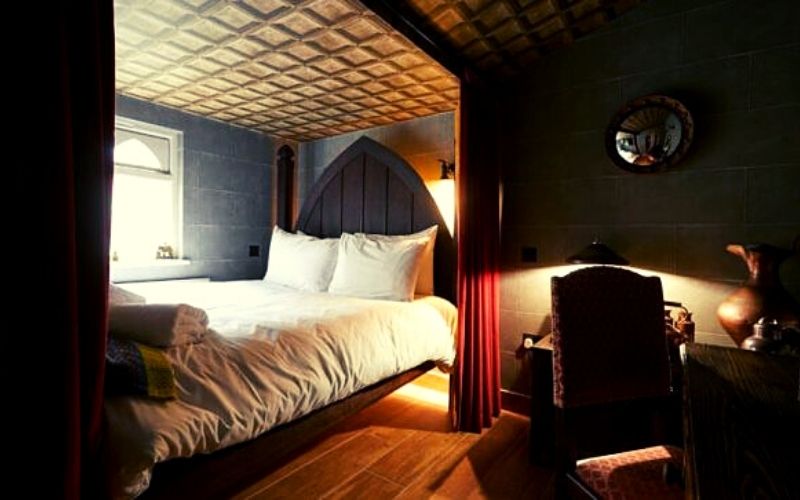 If you aren’t able to visit any of these experiences in person, there are a few virtual Harry Potter experiences to keep you entertained until you can.

Harry Potter Dobble – this is one of our favourite travel gifts for kids. We take ours everywhere with us and it provides hours of entertainment! The same can be said for Harry Potter Top Trumps. It’s nice and small and easy to take out with us. Here are some other ideas:

And if they haven’t already got them, don’t forget the Harry Potter books and movies.

Map of Harry Potter Experiences in the UK

Chelsea Stadium Tour: A Complete Guide To Help You Plan Your Visit

The 16 Most Impressive Castles in England

The 10 Most Impressive Castles in Kent 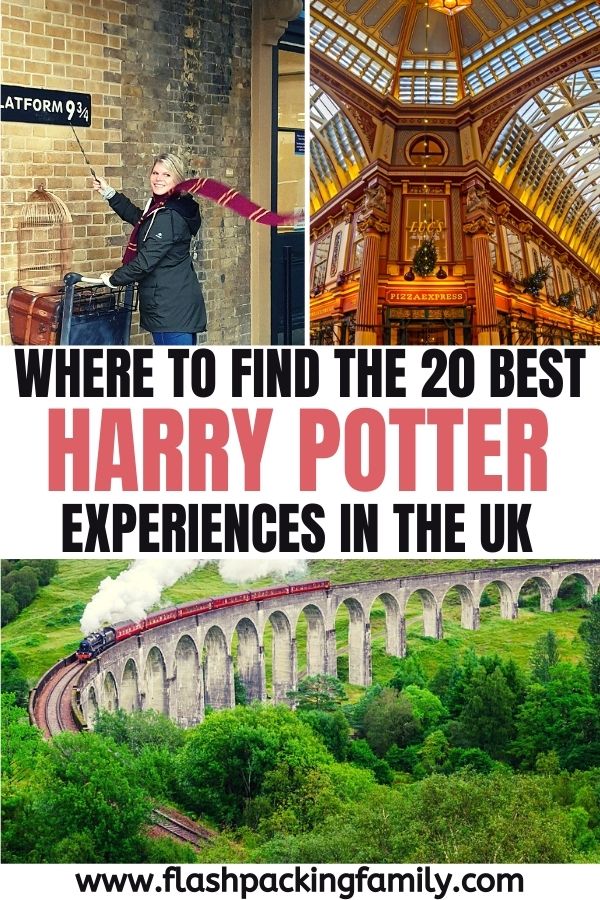 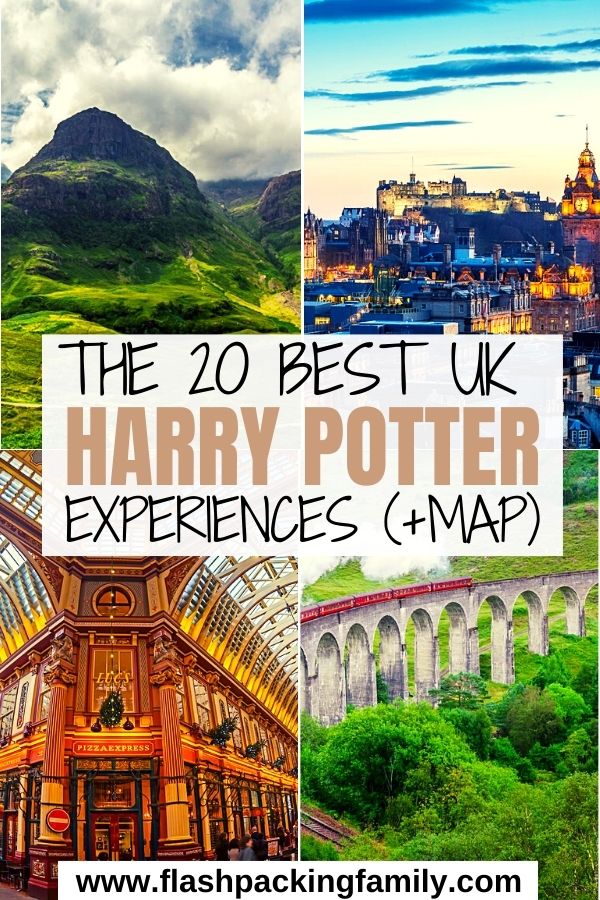 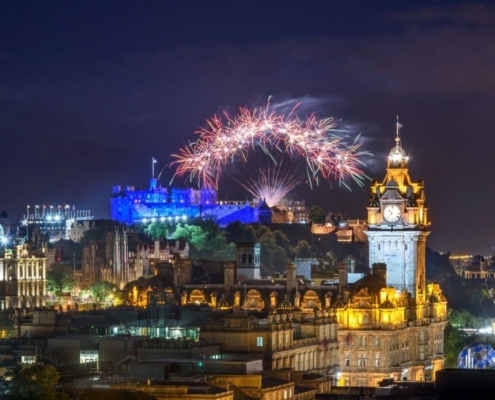 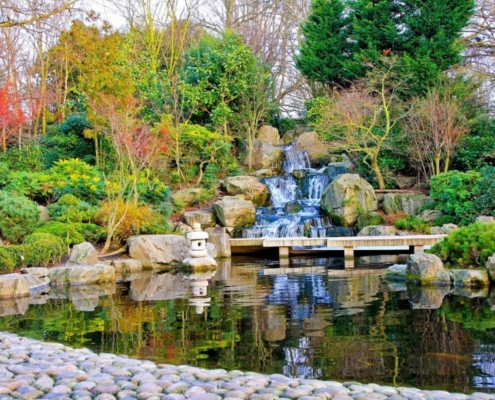 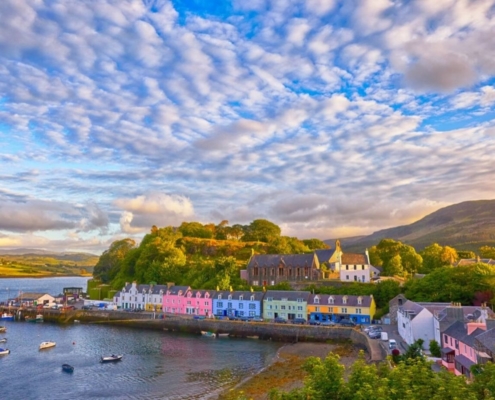 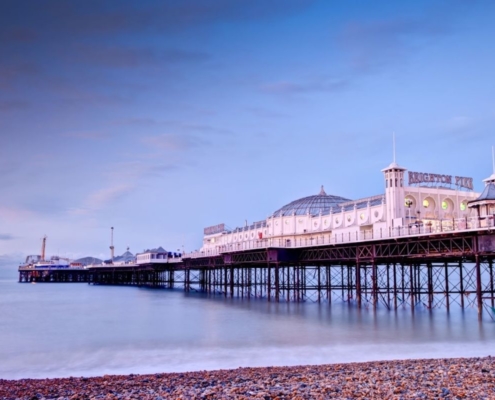 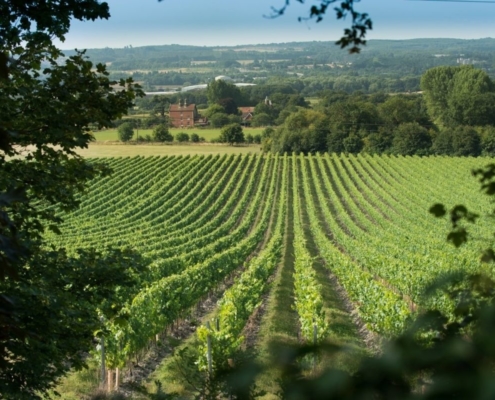 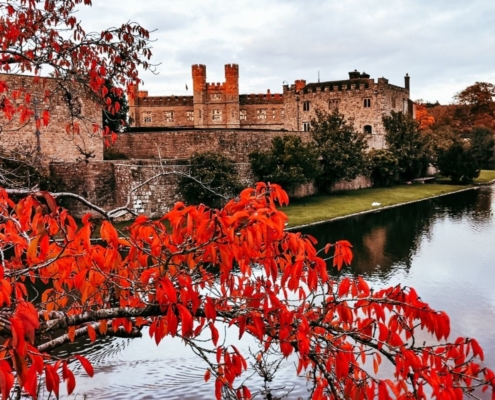 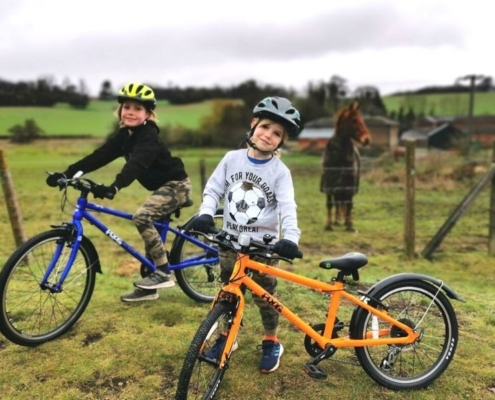 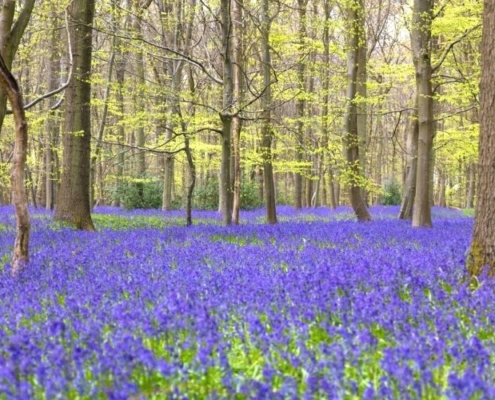