Chelsea Stadium Tour Review: Everything You Need to Know In 2023

In all honesty, taking a Chelsea Stadium tour would not have been high on my list of things to do in London before having kids.

While most people will be heading to London to check out the major sights like the Tower of London or Buckingham Palace, we decided to take a Chelsea football stadium tour!

Knowing nothing about football myself, I can’t say I was that excited about the prospect, but having done the tour,  I can honestly say I enjoyed it.

Whether you’re a long term Chelsea football club fan or just want something a little different to do while visiting London, we highly recommend taking a Chelsea FC Stadium Tour.

Looking for a family holiday with football classes for your footie mad kids? Take a look at these hotels in Europe with football academies. 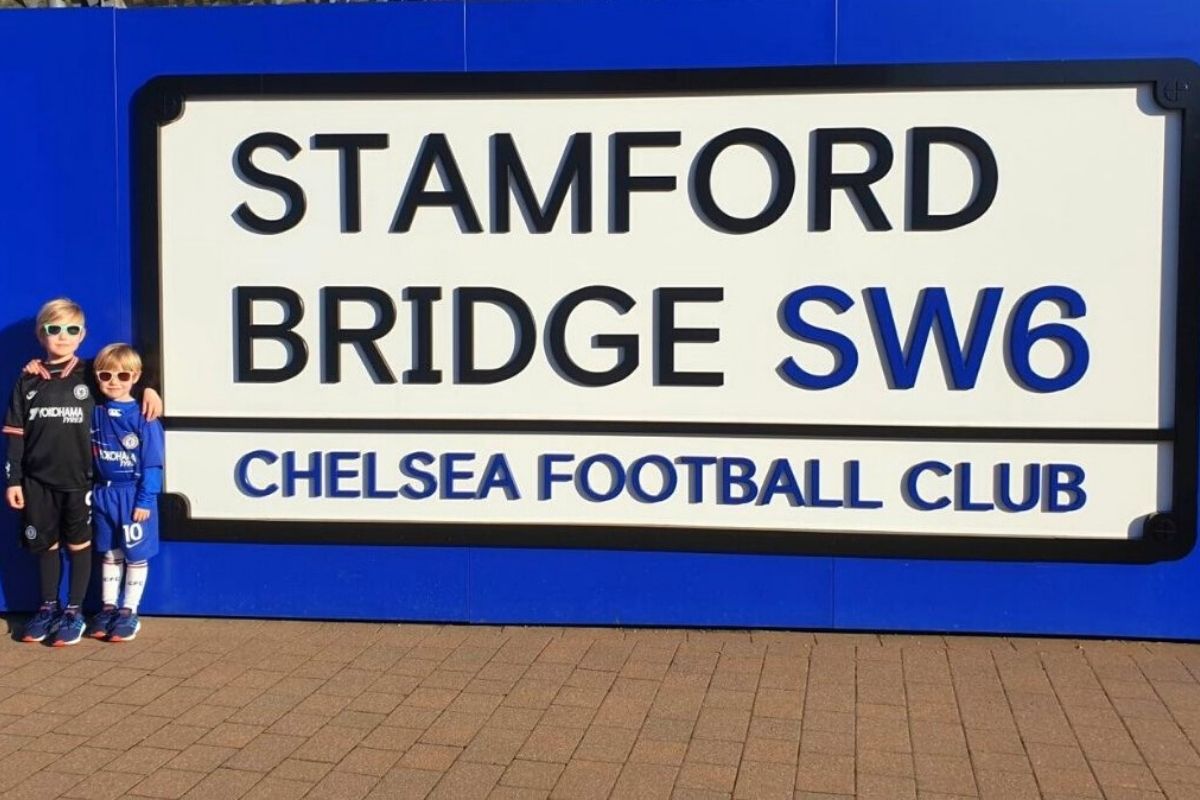 You can buy your Chelsea Stadium tour tickets directly from Chelsea FC website but it is always worth checking third party sites like Tiqets as they generally offer discounts.

If you buy the tickets on the Chelsea website, ticket prices are:

Buying the tickets on Tiqets, prices start at £28 for adults – so there is a bit of a saving. 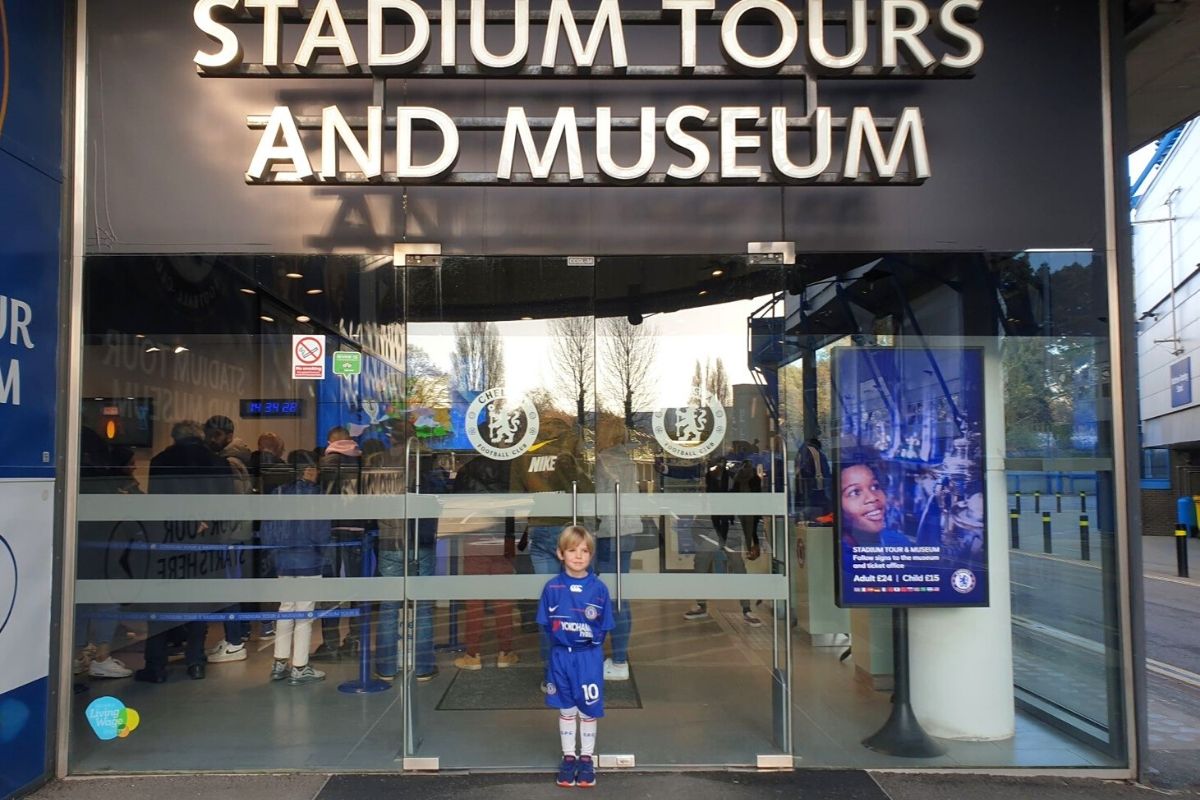 Getting to Chelsea Stadium

So you’ve bought your Chelsea Stadium Tour tickets and wondering how to get to Chelsea Football Club? Here’s how..

Note that the Chelsea FC Museum and Stadium Tours ticket office is almost the opposite side of the stadium to the main entrance on Fulham Road.

You will need to visit the ticket office first as this is where you pick up your tickets and where the tour starts. See below on the Chelsea Stadium Map.

We would not recommend visiting Chelsea Stadium by car because it’s quite hard to find parking. Most of the surrounding streets are residential with parking restrictions.

If you do have to drive, we would recommend visiting on a Sunday when there are fewer restrictions.

The nearest tube station to Chelsea Stadium is Fulham Broadway on the District Line (Green Line).

From the tube station, it’s a quick five-minute walk to the stadium entrance on the Fulham Road (or maybe ten minutes if you have children with you).

There are a number of buses you can take that will stop right outside Stamford Bridge stadium on the Fulham Road. The main routes are 14, 211 or 414. You can see more information about these routes on the TFL website.

If you are taking the train into London for your Chelsea Stadium Tour, take a look at train fares on the Trainline for the best deals.

Our review of the Chelsea Stadium Tour

We arrived at the stadium 30-minutes before our Chelsea Stadium Classic tour started. We had booked the 2.30 tour.

They say that the quietest time to visit is the last tour of the day which starts at  3 pm.

There was a bit of a queue to pick up our tickets but we only queued for 10-minutes. Along with the tickets, we received a Chelsea lanyard which was a lovely keepsake of the tour.

Once we had our tickets, we had a little time to wait before the tour started but not long enough to go and do the museum tour.

There is a chance to have your photo taken with a replica UEFA Champions League trophy which you can buy separately after the tour.

Before you leave the ticket office, make sure that you have your ticket to hand, not just the tour lanyard as they will ask to check your ticket at the start of the tour.

The Chelsea Stadium tour starts at the North End of the stadium with a bit of history about Chelsea Football Club. 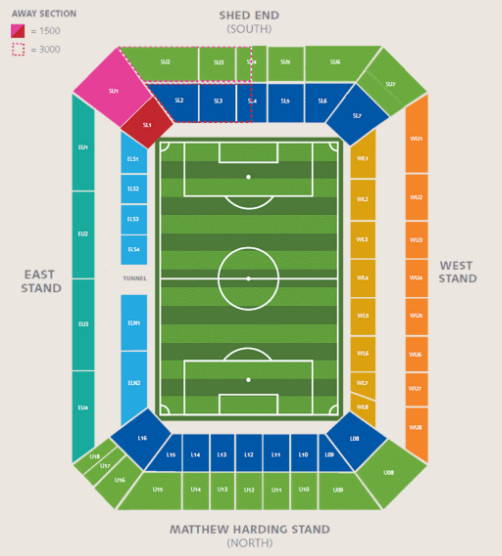 From the North stand, you head along the East stand and inside to the Press Room. At the end of the short talk, you’re invited to come and sit in the press seats.

This was one of the highlights of the tour for the kids because the microphones were working and they got to pretend to be Chelsea players being interviewed. 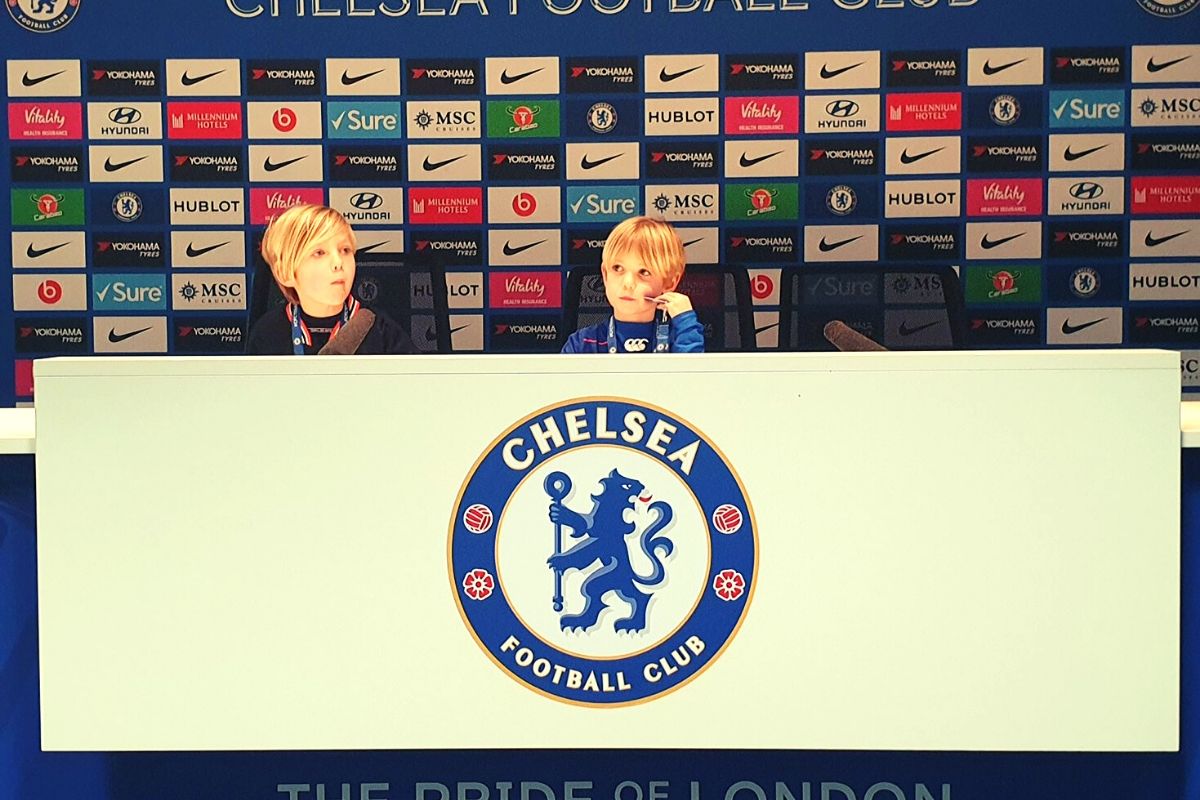 After the press room, you’re taken to the Home and Away Dressing Rooms, starting with the Visitor’s Dressing Room.

The boys were only really interested in the home dressing room though and loved being able to sit where their favourite Chelsea players sit.

The talk includes details about dressing room tactics and pre-match routines. It was interesting to see how players in the Chelsea squad seem to choose to sit with players of the same nationality. 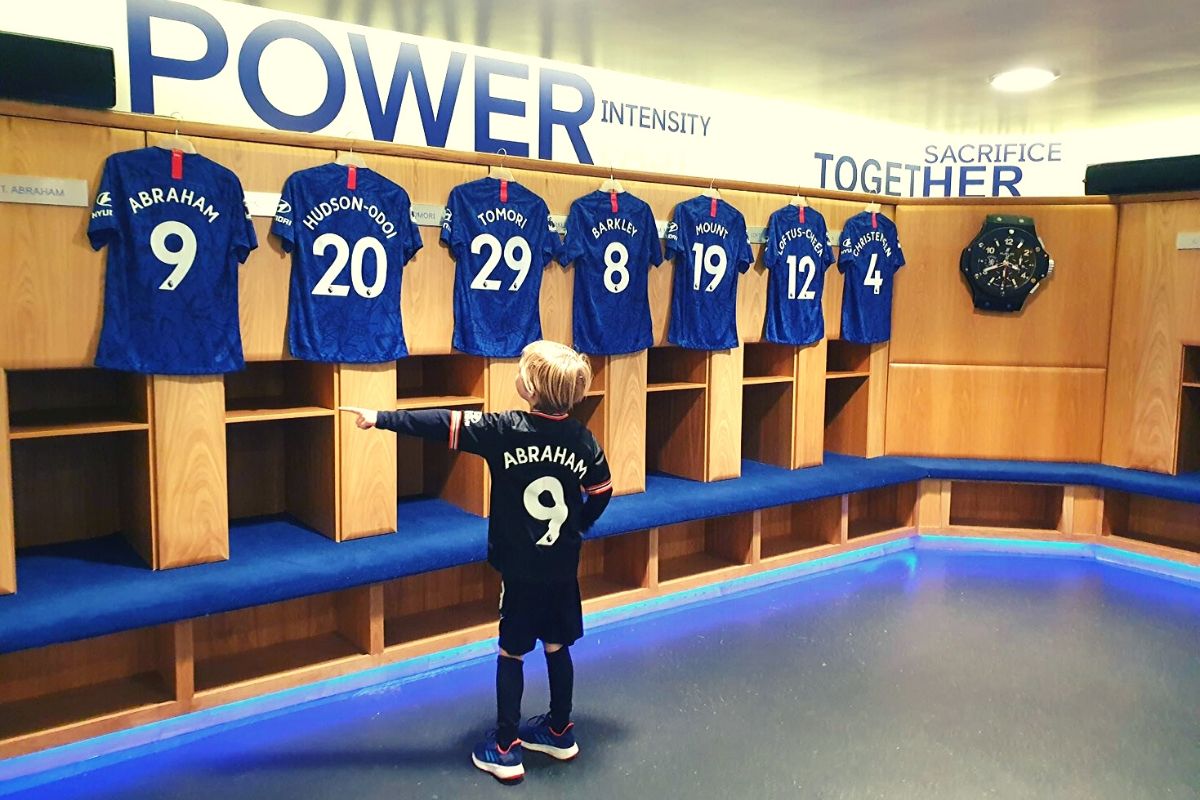 From the players dressing rooms you head out through the players’ tunnel. This gives you a great chance to get a shot of you emerging out onto the pitch as if you were about to start a match. 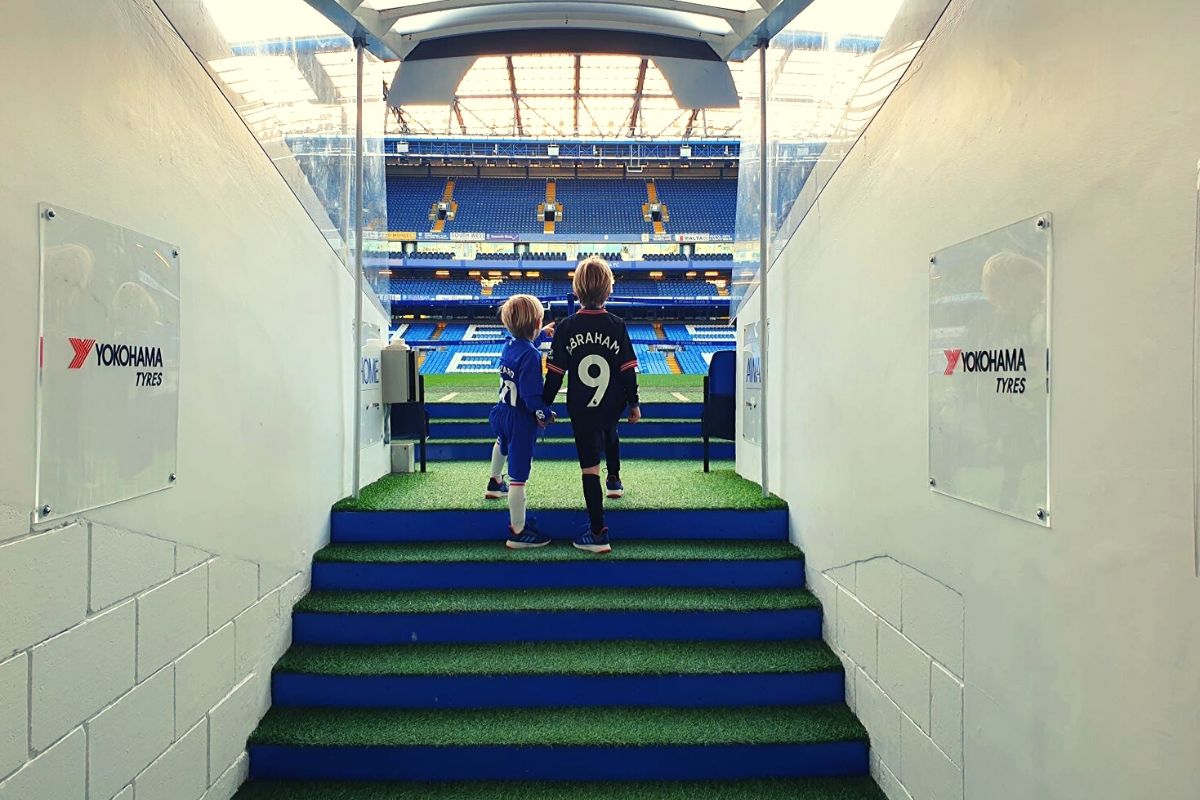 Walking through the players’ tunnel at Stamford Bridge

Once pitchside, you’re at the dugout and you can choose to sit where the Chelsea players sit. There’s a bit more talk about dugout etiquette and how the pitch is cared for by the groundsmen.

The Chelsea Stadium tour ends here after a final Q&A session and you make your way out via the Chelsea FC Megastore where you might want to buy a souvenir of your visit.

The tour of Chelsea Stadium lasts about one hour in total, not including your own self-guided tour of the museum.

You will probably want to spend around 30 minutes in the museum. If you do want to visit the museum, aim to do it before your stadium tour.

The tour ends at the opposite end of the stadium and you will need to walk all the way back to the beginning to do this which will be a lot of walking for kids or those less mobile. 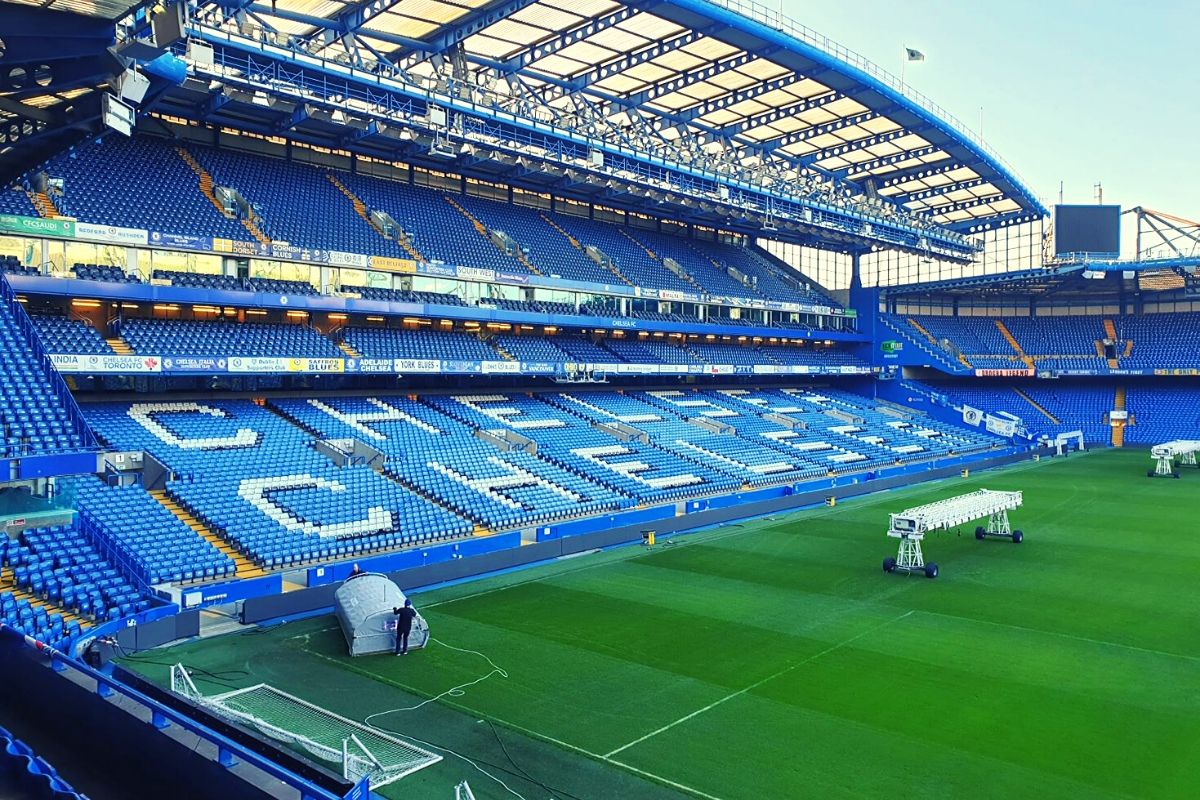 Chelsea Stadium as seen from the south end

You might also be interested in visiting Wembley Stadium. If so, you can buy combo tickets for both stadiums.

If you are visiting London with kids and need more inspiration of things to do with kids in London, we have guides on the best museums in London for kids and family-friendly restaurants in London.

Or you can take a look at our London family travel section for more!

If you found this post helpful, please feel free to share it with friends or pin it for later. 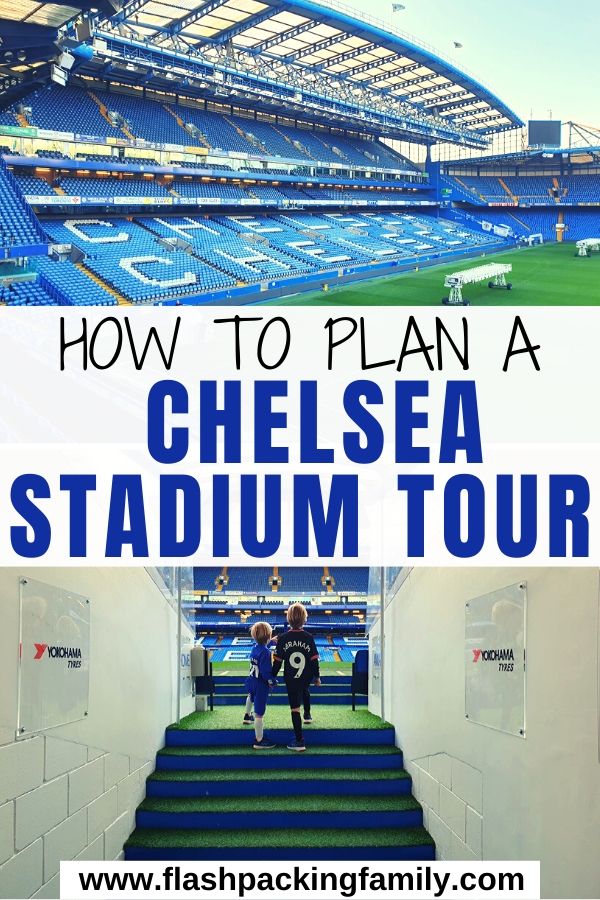 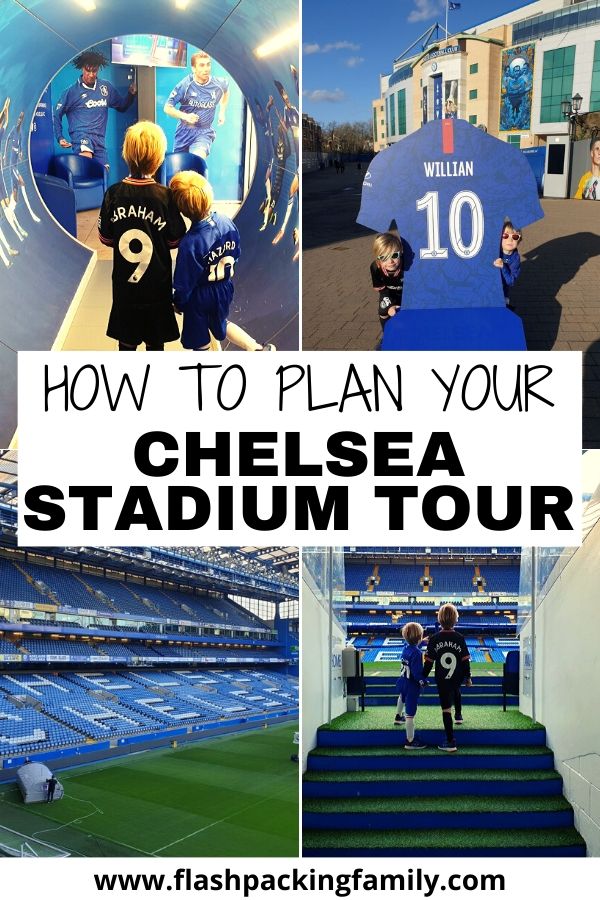 12 Places to Enjoy Afternoon Tea For Kids in London

The 20 Best Places to Take Afternoon Tea in London

Travel After Coronavirus: What Does The Future of Travel Look Like?

Landal Sandybrook | The Perfect Alternative to Center Parcs in the Peak Dis...
Scroll to top